Given the high prices of originals, most collectors only own one or two of these. Not a whole lot more can be said about them than you probably already know, but I thought it might be fun to see how many different stampings on the inside we can come up with. So this will be a growing inventory of stampings. If you know of one you don’t see here, please send me a picture.

Below are pictures of original brassards, a brown and a green one. Other than that, the only difference between armbands is the stamping on the inside.

These brassards were issued for the Normandy invasion to both Britsh and American forces and meant to detect the presence of poison gas (such as mustard gas), which the Allies were afraid Hitler might employ as a desperate measure. These paper armbands were impregnated with the same vesticant detector paint which was also painted on vehicles and helmets. On contact with poison gas, the paper would turn pink or red.

All of these armbands were British made and a few million were bought by the US Army. They can be found in two shades, brown and green. Some sources say that the green ones were used by the British, but others say that both colors were used by Tommies and Yanks alike. The latter seems more likely, but from black and white period photographs there’s no telling for sure. If anyone has the answer to this, let me know. 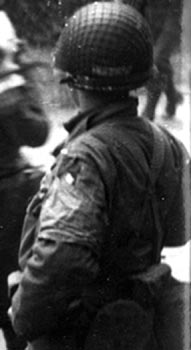 Mark Bando’s website says “Photographic evidence indicates the 502 PIR probably enforced the rule to wear these, whereas they were only spottily worn in the 501st and 506th. 101st Headquarters and glider units also seemed to wear them. I suspect these were issued inside the gas mask bag, and in units where the rule to wear them was not enforced, the gas masks were thrown away after landing in France. Many troopers never even saw the brassards, as they never bothered to look inside the bags before discarding them. Ed Benecke of A/377th took the photo at the right outside St Marie du Mont on 7 June, 1944. The man shown is wearing his gas brassard on the left shoulder, which mostly obscures the 101st eagle patch. Most troopers started out wearing them on the right shoulder, so their patch would still be visible, but they soon discovered this interfered with shouldering their rifle for firing.”

Michel De Trez in ‘At The Point of No Return’, p. 55, writes “Confirmed by period photographs, the 82nd troopers wore very few gas brassards and the only known photographs are from the Pathfinder series.”

Markings
On the inside, the gas detection brassards bear a date and manufacturer stamp. This is the list of different stamps I know of, sorted by date (I think). If you have one with a different stamp, please send me a picture, and I will include it here.

Repros
Modern copies of these brassards are usually of the greener shade. Whereas the paper generally feels quite realistic, the cloth loop has often been sewn on with two square stitches, instead of a crossed-over loop in a V-shape as on the originals. But correct copies are available and don’t cost more than the bad ones. 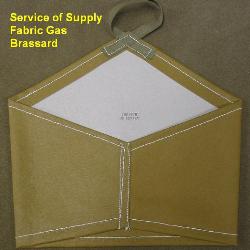 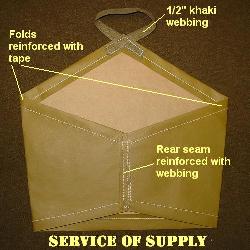 Service of Supply has gone all the way to produce realistic copies. They have a fabric version (more pliable) for re-enacting and a (more fragile) paper version. The fabric version is stamped with their trademark, but the paper one isn’t. To make the paper brassard a bit sturdier, they reinforce the seams with fabric inside.

What Price Glory‘s rendition is nice if you want to go for the brown type. The price is right too. This one isn’t clearly stamped ‘WPG’ like most of their repros, so beware of people trying to pass them off as originals. The stamped code looks real enough, but they have got the font wrong (which is what often gives away repro webbing etc.).

Use of vesticant detector paint

Similarly, 82nd Airborne pathfinders also used this paint on their helmets to create a camouflage pattern. This probably had more to do with the color of the paint providing an actual camouflage effect, rather than its gas detection function.
The picture on the right is from eBay, advertised as an original. Examples of such helmets can be found in Michel De Trez’s ‘American Warriors‘, and ‘At The Point of No Return‘.

Cans of vesticant paint can still be found quite easily if you want to customize your uniform or helmet yourself. 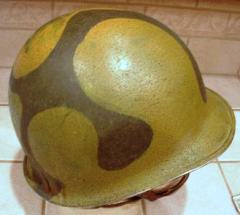 You can contribute too:

This article describes the gas detection brassards that I or friends own or have pictures of. As goes for most of my other articles, there is virtually no literature on this subject, so you are welcome to contribute with any additional pictures and information you may have. I am particularly interested in finding an explanation for the difference in color and which precise units did or did not wear these armbands.