I sold all my airsoft AEG’s years ago, but I tried to get my hands on one of these as soon as they came out. After putting off buying a Marui Thompson because of plastic wood, plastic lower receiver and high price, and the Cyma Thompson, cheaper and full metal, but still plastic wood, I was thrilled by the announcement of the King Arms Thompson: Full metal, real wood and fully trademarked. No Japan, ASGK or whatever markings anywhere!

Let’s get down to it, shall we? First, the box. I ordered my KA M1A1 from Loopingshop.be, complete with a box of 5 extra mid-cap magazines, an 8.4v large-type battery and a repro Thompson sling. A manual is included. Nothing special there. 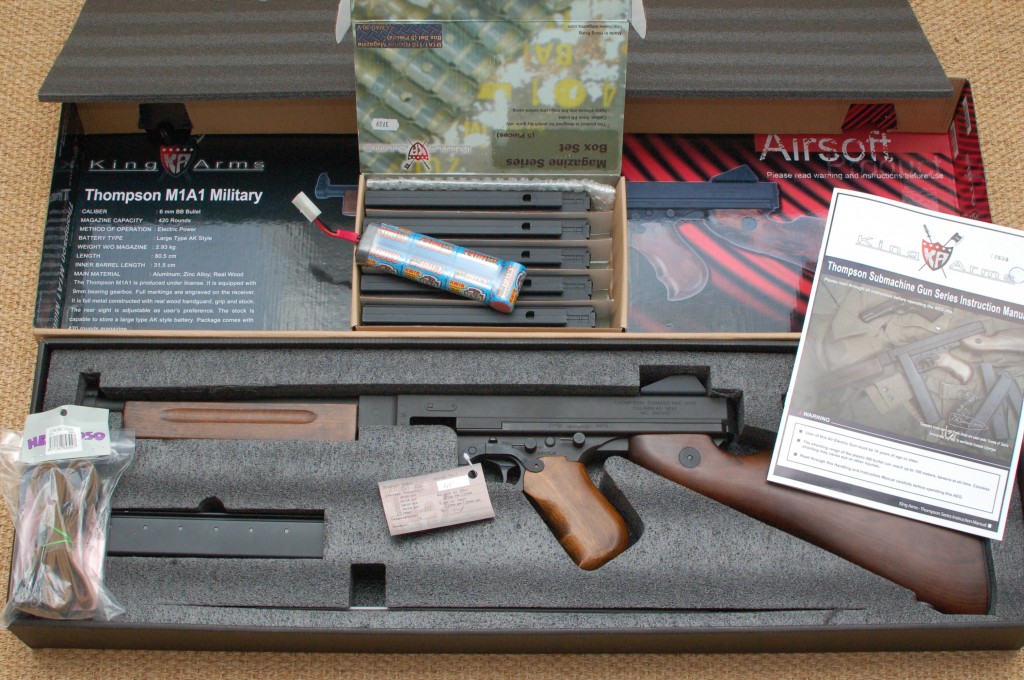 King Arms Thomson new in the box with accessories

The magazines are very realistic. Of course the metal wind-up high-cap magazine included with the gun is more realistic, but the plastic mid-caps are very passable mag pouch fillers. 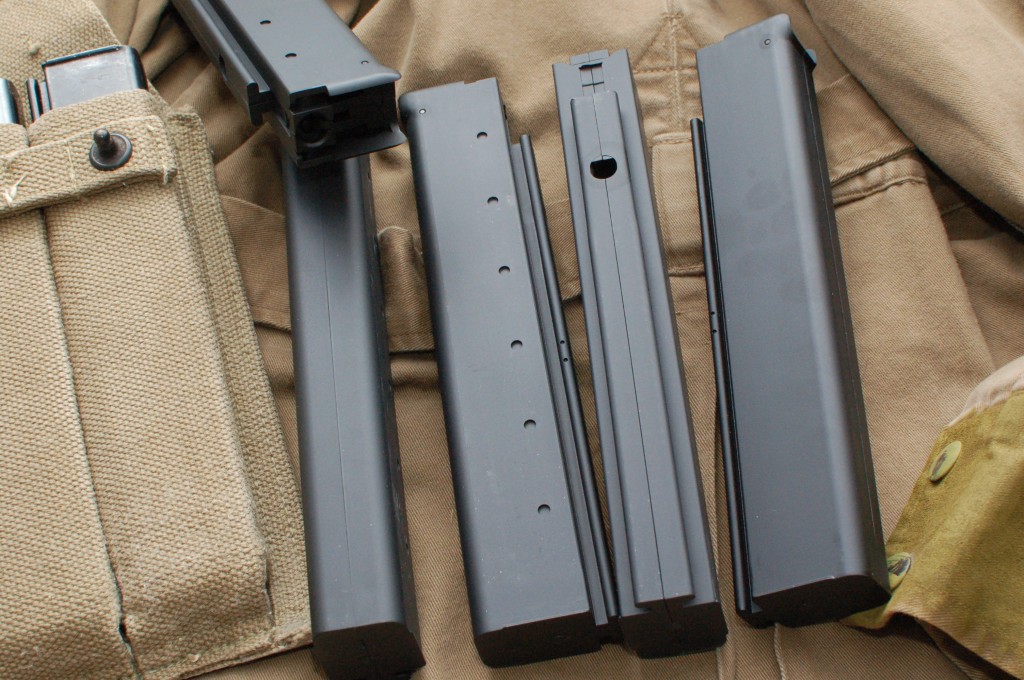 Mid-cap magazines shown from all sides 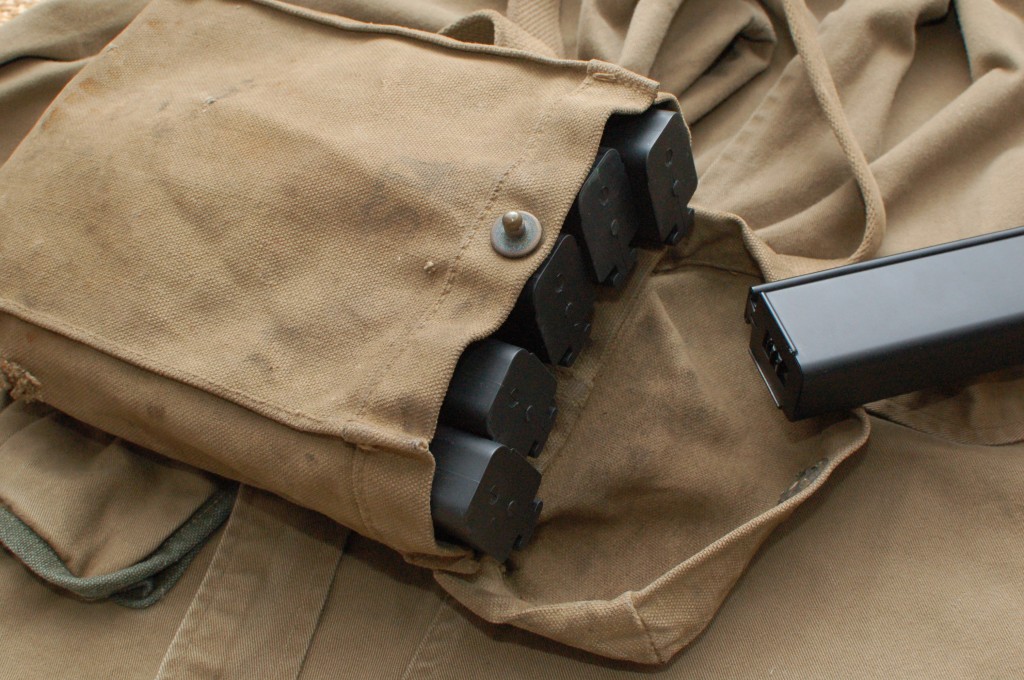 Here you can see them compared to a genuine WW2 Thompson 30-round magazine manufactured by Auto Ordnance Corp (at the left). 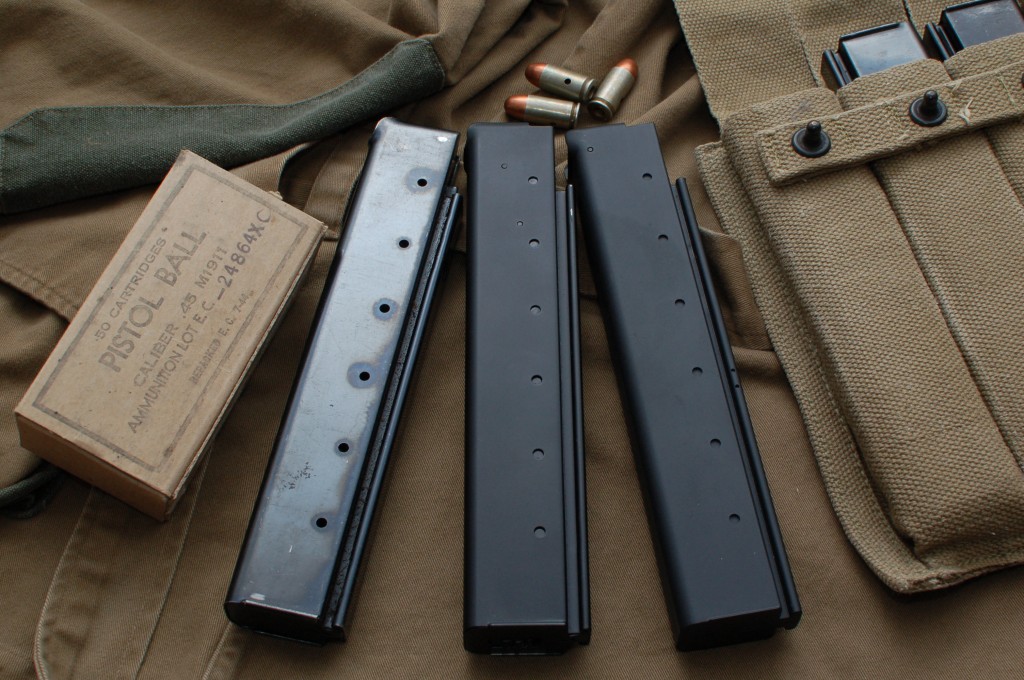 Then the gun itself. Seen here from the left-side with sling installed. What struck me particularly is the finishing of the metal. Instead of the black of Marui and others this is the same grey-green military parkerisation as the real-steel weapons. 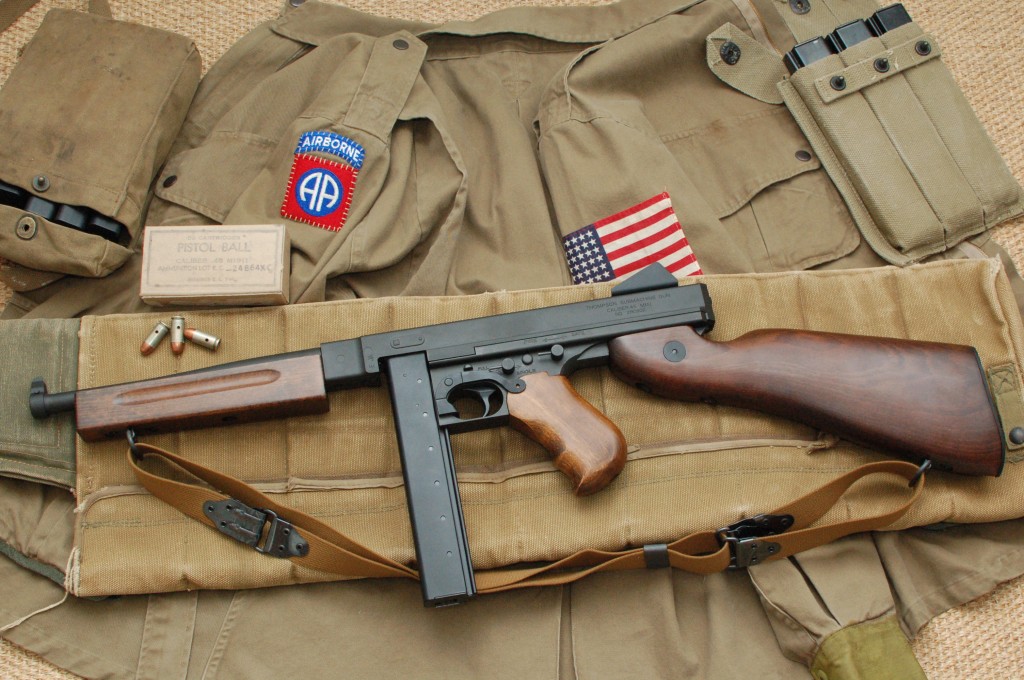 And the right-side with the cocking handle. The reason I wouldn’t also buy the KA M-1928 A1 is that it has the same cocking handle, instead of the earlier knurled knob at the top of the receiver. The M1A1 is perfect though. 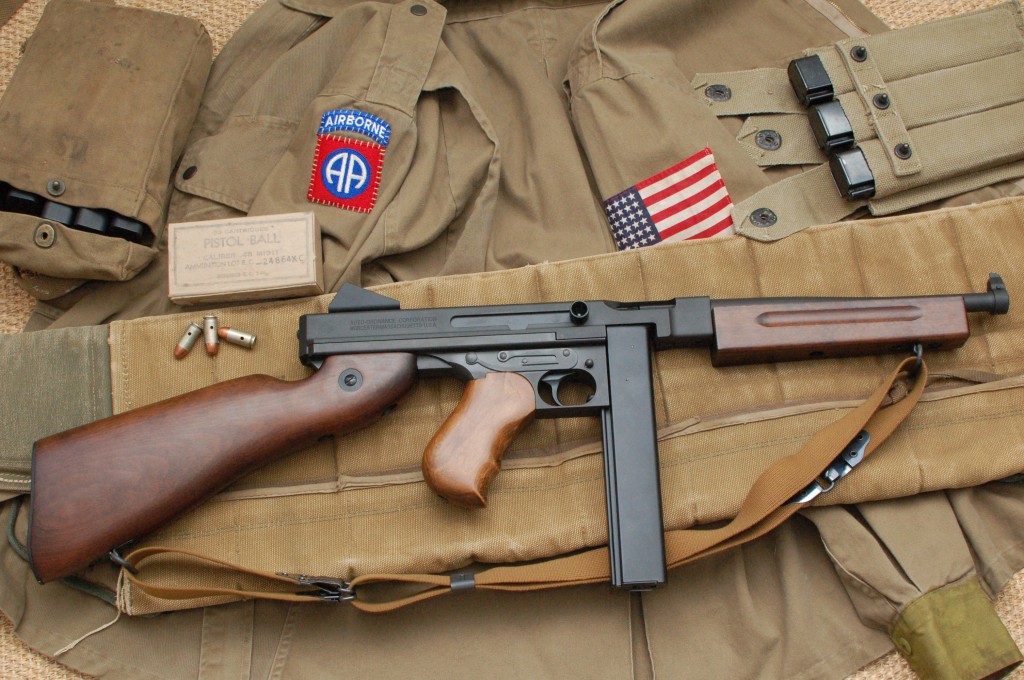 Here is a close-up of the receiver markings. The right side shows the original trademarks. Except, on the real Auto Ordnance Thompsons, it says BRIDGEPORT.CONNECTICUT.U.S.A., whereas here it says WORCESTER.MASSACHUSETTS.U.S.A. Note the nice and deep engraving. As opposed to the laser-engraving on the Cyma… 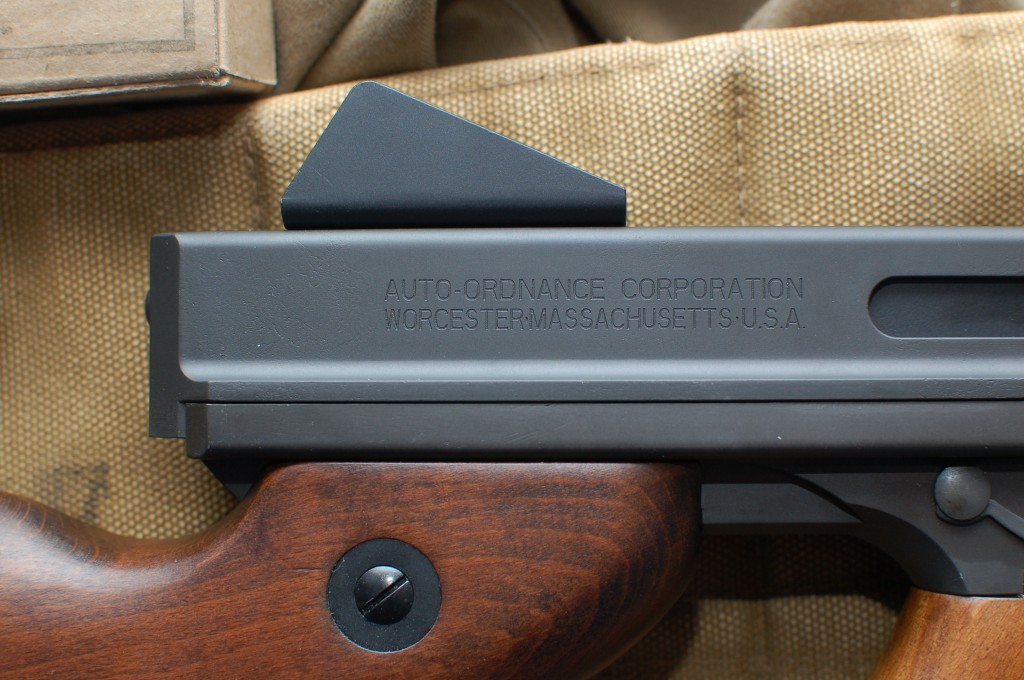 Trademarks on right-hand side of the receiver

On the left-side, the receiver markings are exactly the same as on the originals, and KA gives each Thompson its own unique serial number! 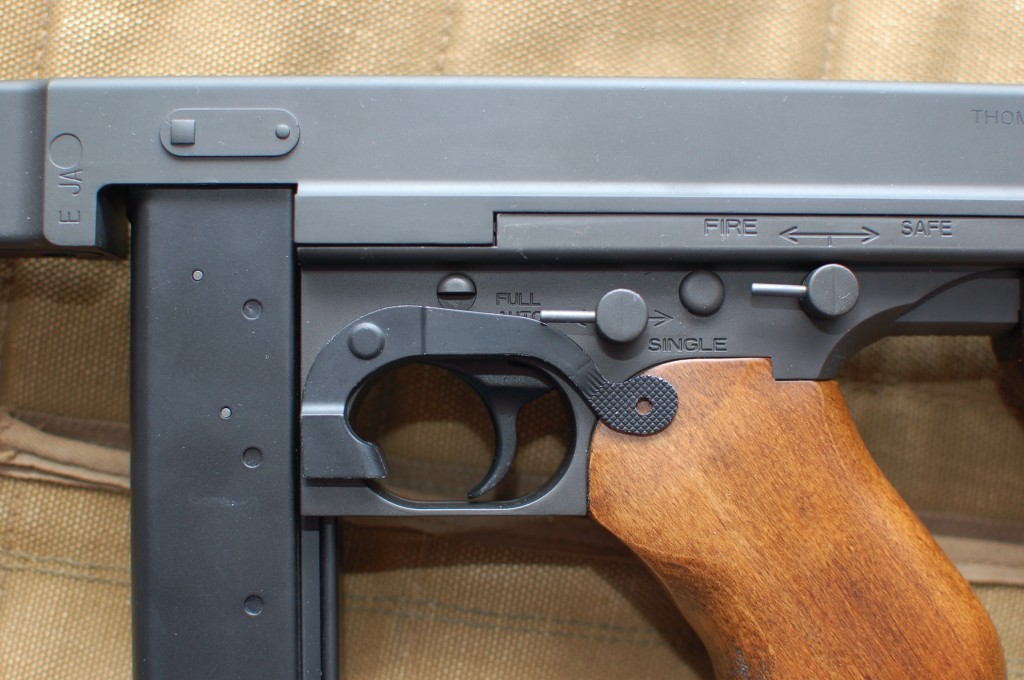 Markings on the left-side of the receiver 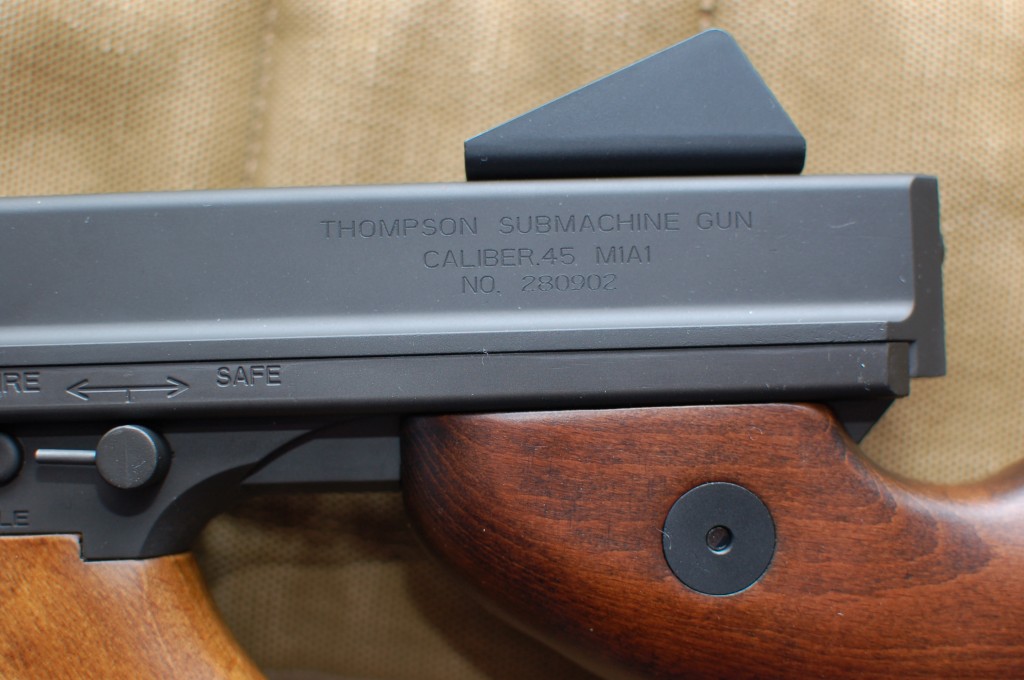 Trademarks with unique serial number on the left-side

The icing on the cake are the literally ON the cake. The receiver markings at the top include U.S.PROPERTY and the Thompson-logo trademark. The same as can be found on original WW2 Tommy guns. Here you also see how the rear sight has been riveted on, instead of screwed on. Even the expensive Hudson Thompson model gun doesn’t have this! 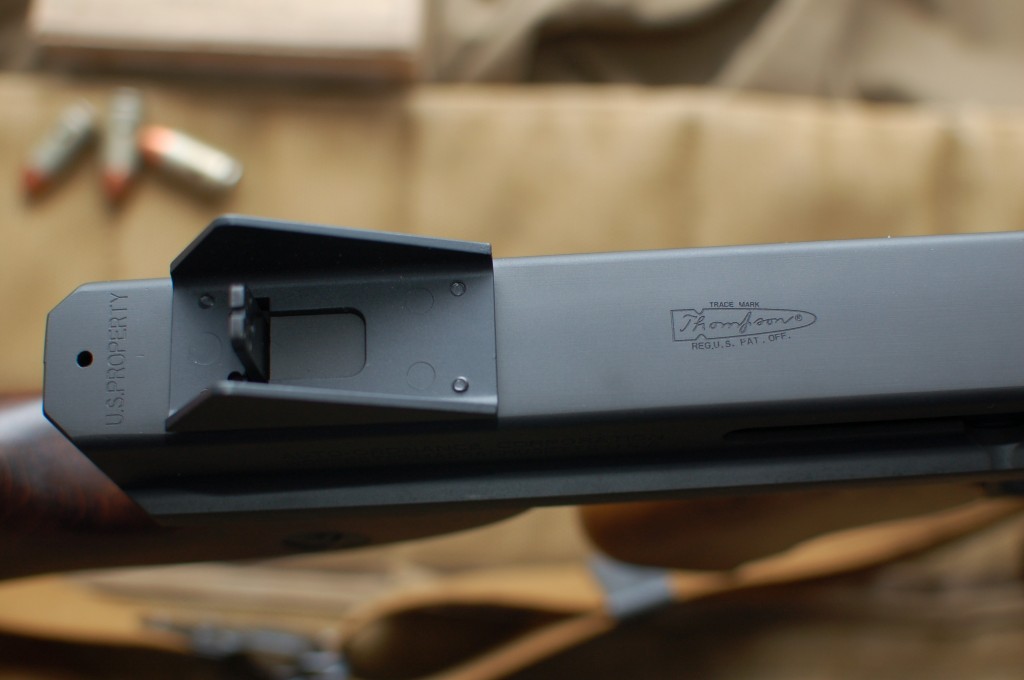 Markings on top of the receiver

The front of the barrel also looks identical to the original. It will need some aging though, and a bit of black paint applied to the rim of the brass inner barrel. 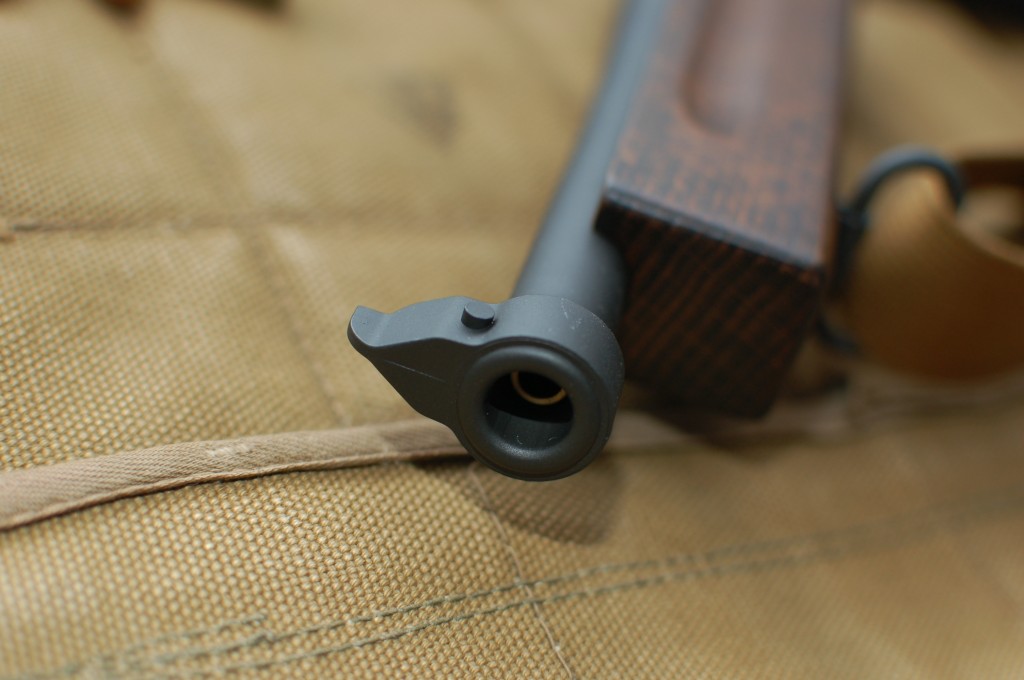 The butt plate is also, eh… identical. What can I say? 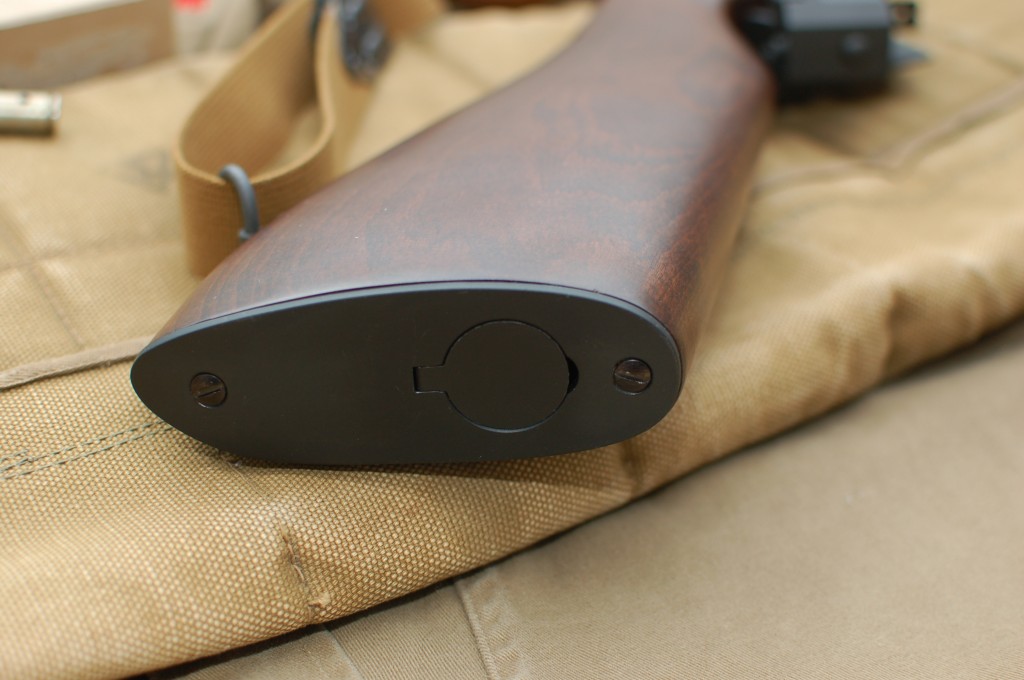 Don’t I have any gripes with this fantastic replica? Yes, I do, but only very, very minor ones: the top edge of the pistol grip is flat instead of rounded. It’s hardly noticeable, especially when holding it. You can see it on this picture of the  bottom of the weapon (photos usually missing in reviews). You will also notice two screws securing the barrel to the receiver, instead of one. And the magazine release lever is a bit thin. Saying that the wood is too nice is not really a criticism. In a future update, I will show you how this Thompson looks when I will have aged it a bit. 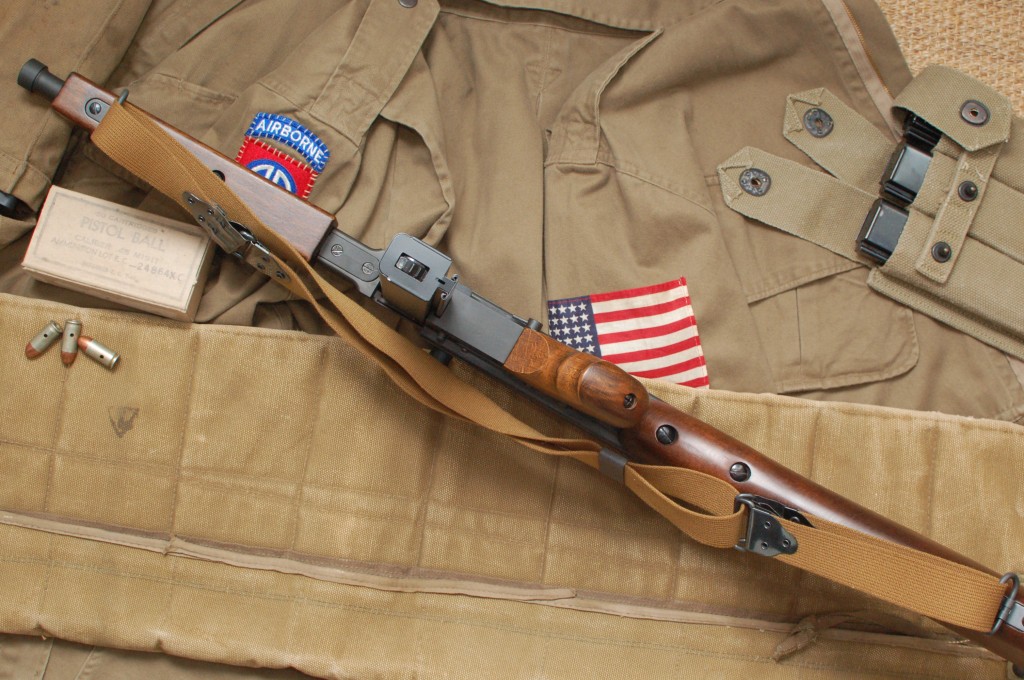 Bottom view. Note the two barrel retention screws and the flat front of the pistol grip.

To conclude, the shooting performance. I must say I only test-fired it on a cardboard box in my basement. It’s fun! In the confines of the concrete walls, the report is nice and loud. The box was hit pretty good from 20 feet, but that’s all I know. It seems to hit pretty hard at close range, but you should buy this gun for re-enactment, not for target practice.

Update: King Arms Thompson M1A1 ‘aged’
I finally took some pictures of my ‘aged’ King Arms Thompson. To my taste, I already obtained the desired effect with some light rubbing with fine steel wool. I could have dented the furniture with a washcloth filled with nuts and bolts, but I couldn’t get myself to ‘ruin’ the fine woodwork. As I mentioned before, all the metal already has a military grey parkerized finish, so I don’t think too much polishing is called for. 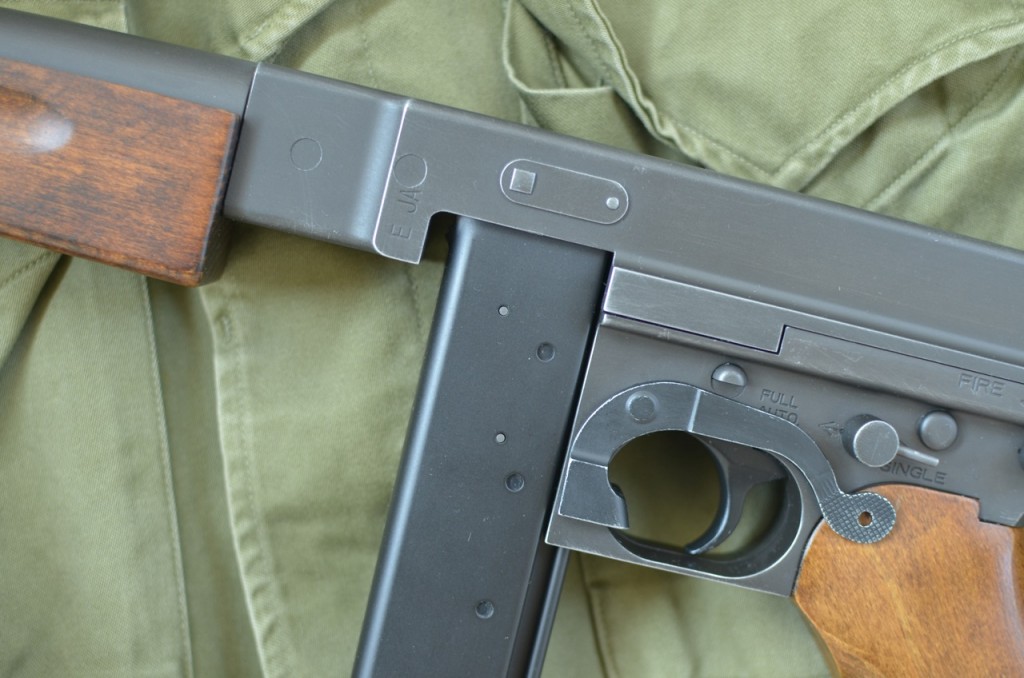 Left side of receiver. Note details of the result of light sanding with fine steel wool. 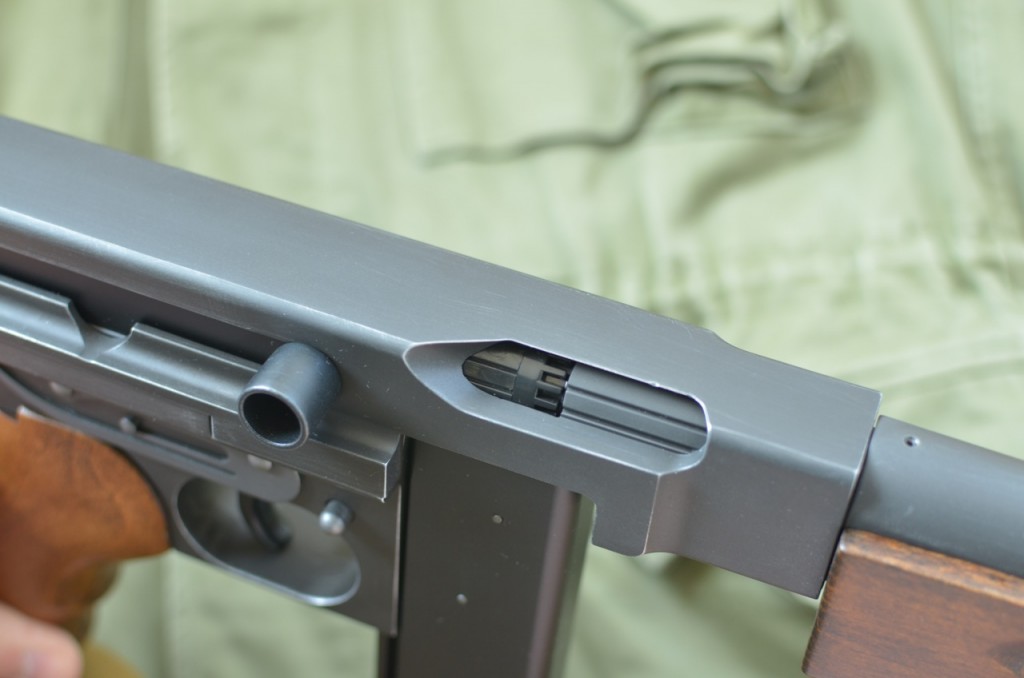 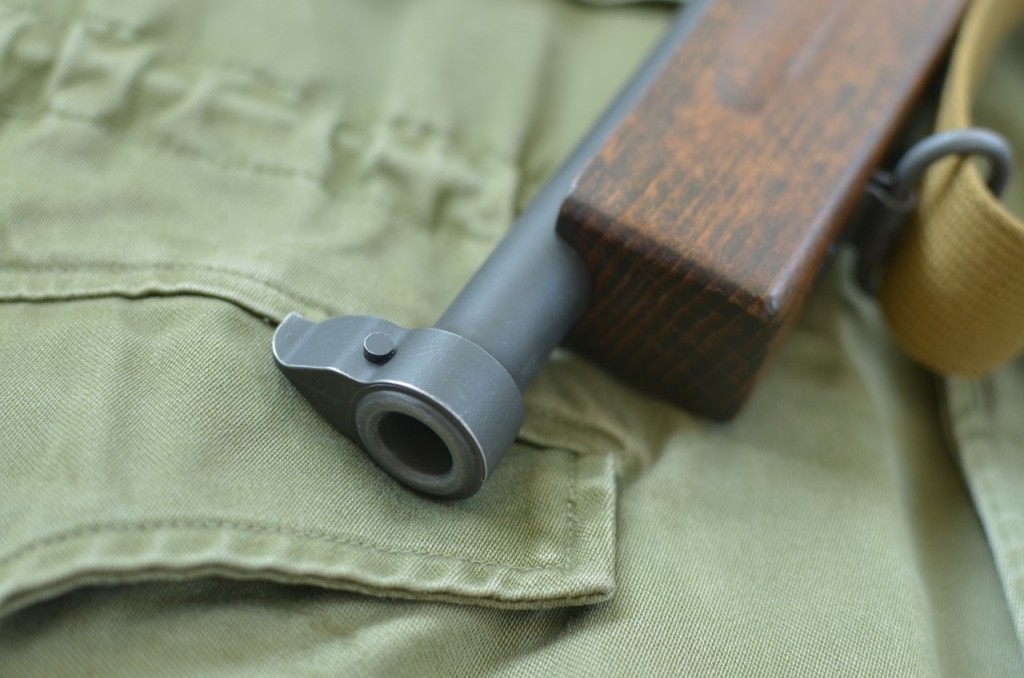 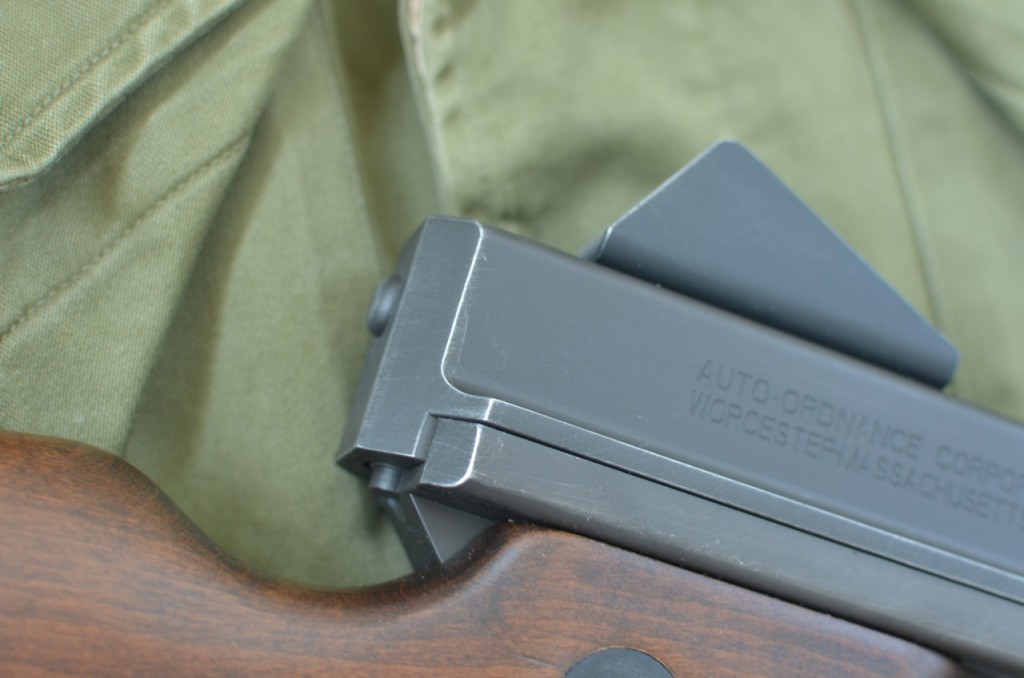