Deactivated Springfields are hard to find over here, and expensive for an old bolt action rifle. For a long time, I toyed with the idea to build a reproduction M1903A4 sniper rifle. I had pretty much given up on the idea until I saw this reproduction. This could be come that sniper rifle after all!

I bought this M1903A3 because the A3 is the perfect platform to convert into an A4. The A4 is basically an A3 with the rear sight replaced by a scope mount and scope. The bolt handle got a cut-out in order not to bust the scope while reloading and the front sight was removed. Sounds easy enough, but what ever is?

The Apple Airsoft version is full metal and wood, marked REMINGTON MODEL 03A3 etc., as per the originals, and the safety catch and bolt cut-off bear the correct markings. No shallow laser engraving here, but proper deep engraving. The shells you see in the photos are empty shells from WW2, not dummy rounds to hold the BB’s or anything. 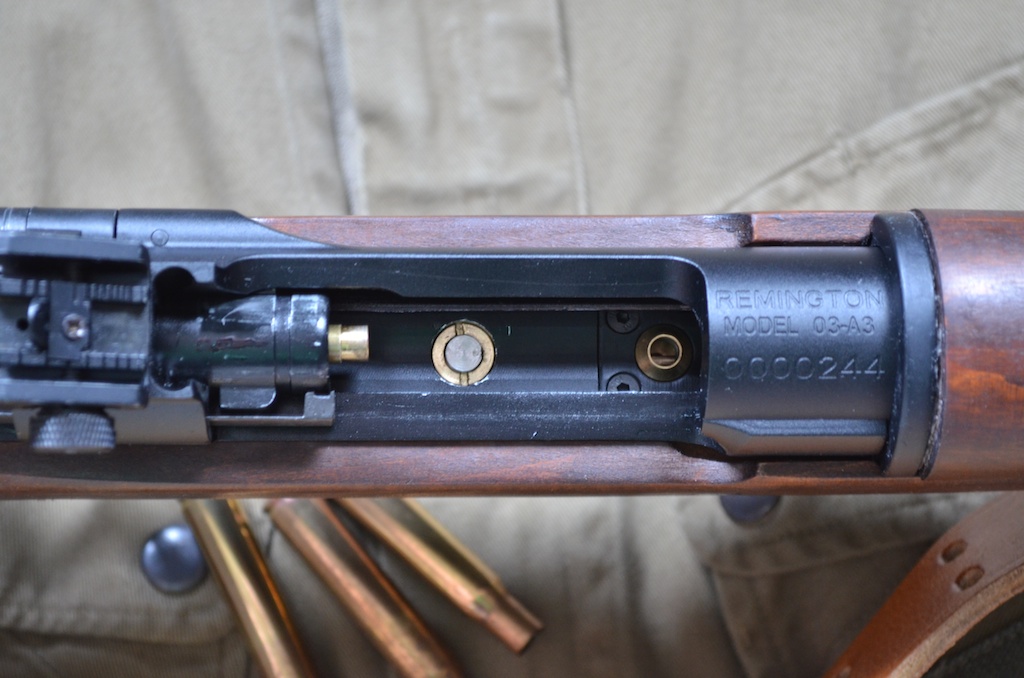 Below is a photo with the breech closed. Note the engraving READY on the safety switch: 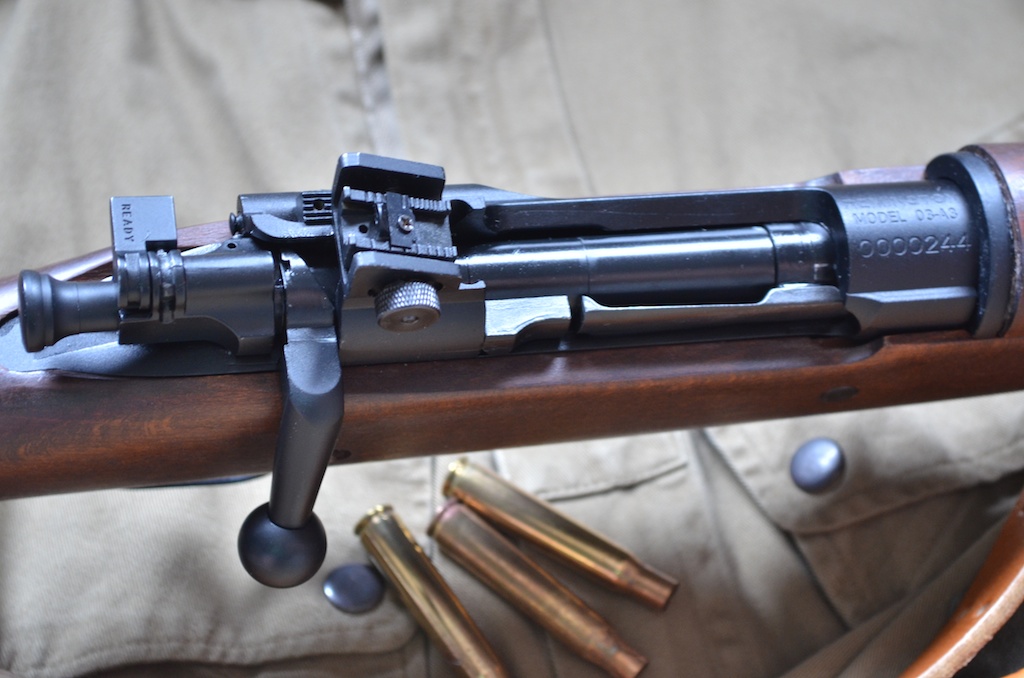 This animation here shows the cut-off switch. It should be turned to ON for loading and firing and to OFF for disassembly of the bolt group. This works exactly like the original, but I would recommend not disassembling it too often. It’s all pot metal and the fit of everything is not as tight as on the real steel.

Speaking of pot metal, if I ever want to convert this into a sniper rifle, cutting a recess into the bolt handle will be risky. I can probably carefully make the cut-out with the Dremel, but I’m afraid it will break when operating the bolt.

Moving to the business end then, we see that the front sight is actually one part with the muzzle cover. You can’t really see it in the photo. This means that I won’t be able to just detach the front sight to convert it to a sniper rifle. A new muzzle end will need to be CNC’ed to slip over the barrel.

So this one is for the folks at Apple Airsoft: when you release a sniper upgrade kit, please include the scope rail and scope, but also a special bolt lever and muzzle end. I can’t wait!

I have not tested if the bayonet lug will hold a real M1917 bayonet (or other), because I don’t have one here to try it with. These weren’t used in WW2 anymore, so it wouldn’t be a big deal if it doesn’t fit. 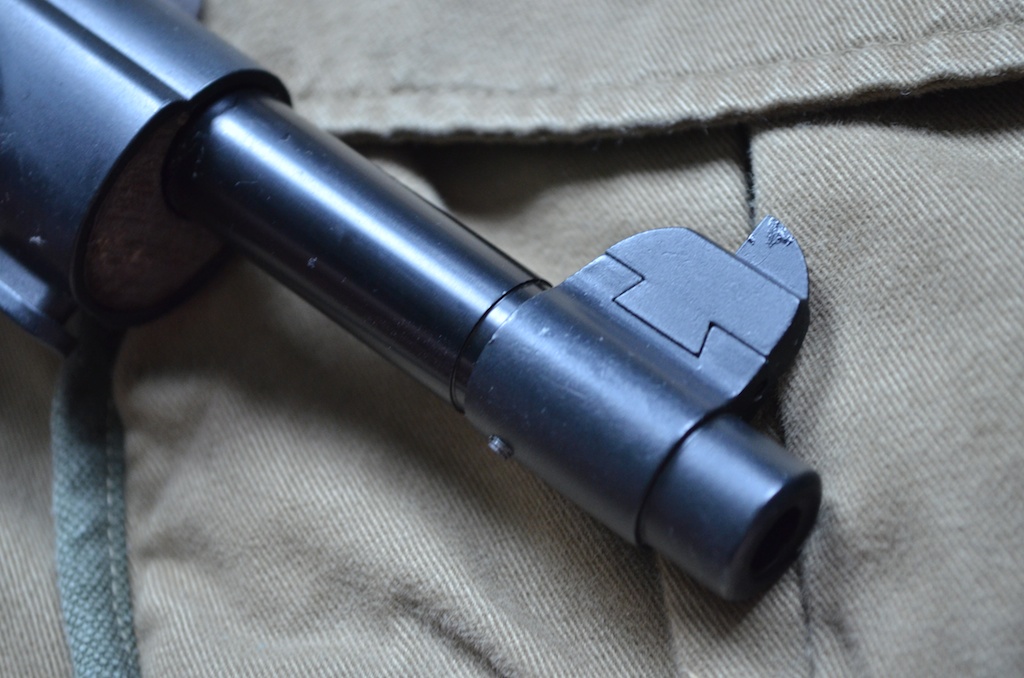 This here is a detail of the butt plate with the hatch covering the recess for cleaning tools. The hatch is a separate part, but I couldn’t get it to open without unscrewing the butt plate. So this is just for looks. As you can see here the structure and color of the wood are really nice. 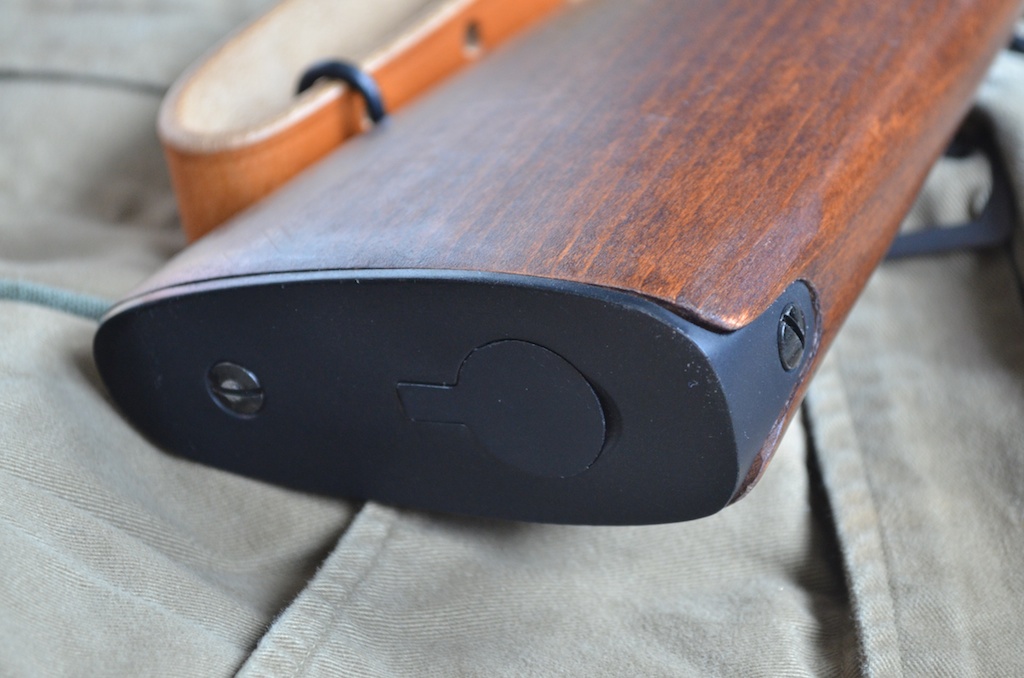 I didn’t buy it for airsoft shooting, but of course I did fire it. The CO2 cartridges pack a nice punch. At the store it clocked around 365fps and in the yard I could hit a soda can at 15 meters without difficulty. This rifle has no hop-up, so don’t use heavy BB’s. I got satisfactory results with the cheap .20gr BB’s I had.

Here you see the magazine. It houses the CO2 cartridge and the BB’s. Again, the brass shells in the photos are for display only and don’t come with the rifle. A shell ejecting action would have been even greater, but there’s no room to put it all. 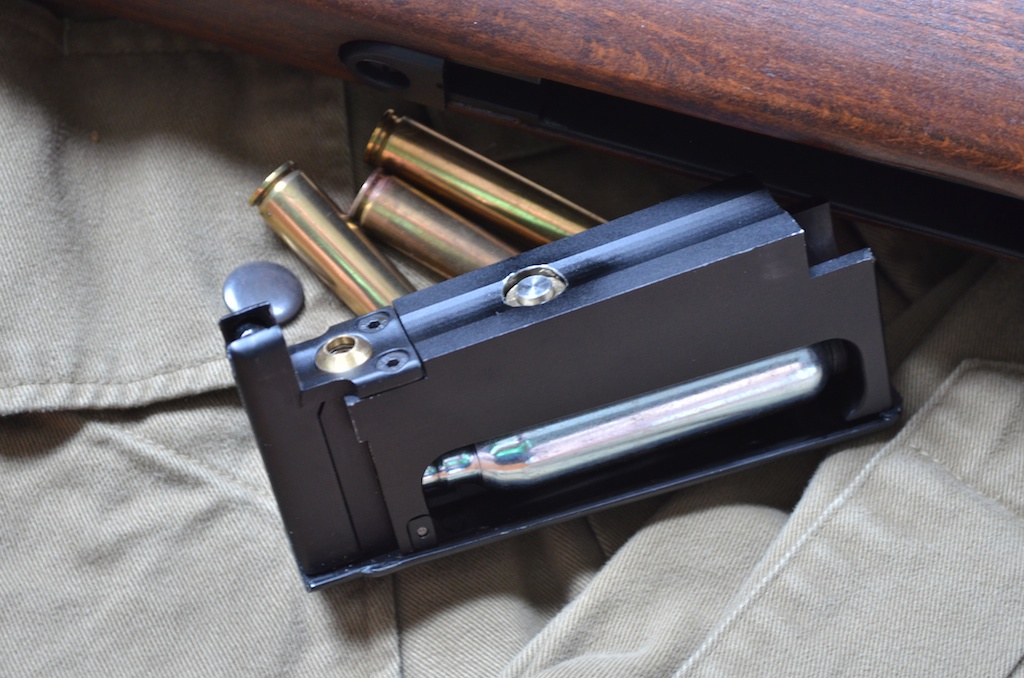 Detail of the part where the BB’s are loaded. It will take about 10 rounds. When the magazine is empty it’s not possible to completely forward and lock the bolt. The bolt will hit the magazine carrier. That’s a bit annoying if you just want to dry fire the rifle. 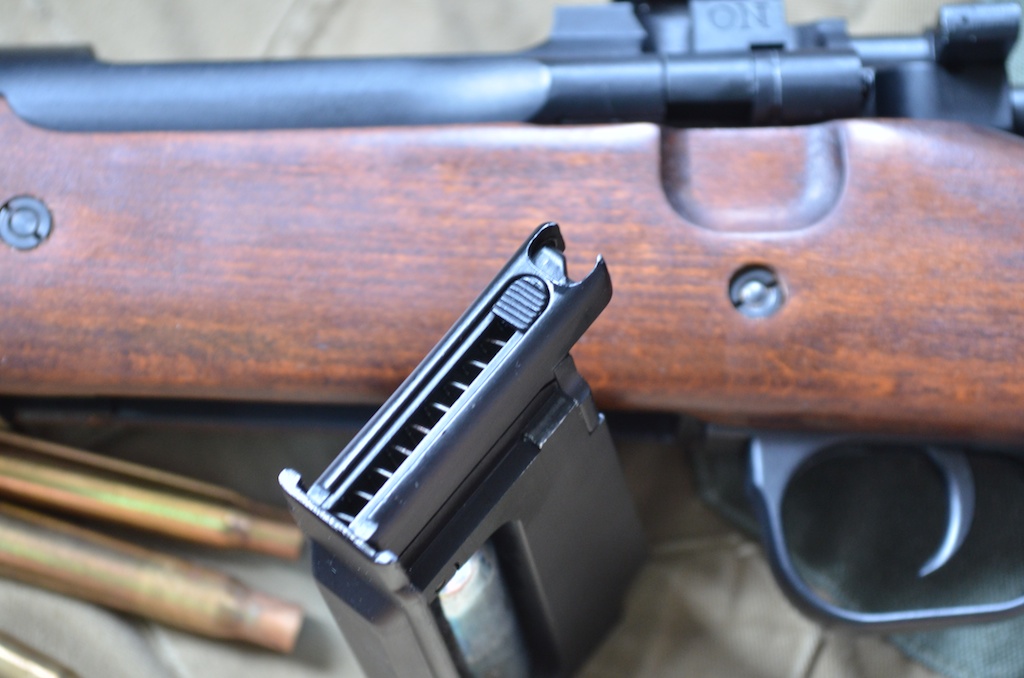 It’s a bit faint on the photo above, but I later noticed that the trigger guard is not as per the original M1903A3, but rather belongs on the earlier models. This rifle has the early type machined trigger guard instead of the late war bent sheet steel trigger guard. Now I think this one is prettier, but I would just like to point this out.

Next up will be the results of some ageing I want to do, because it looks much too ‘new’ now. I will give it the same make-over as the King Arms Thompson and the ACM BAR M1918.

I bought this rifle at Gunshop Lille, in case you were wondering where to get one. The leather sling is from Quartermaster Inspector (QMI.be).