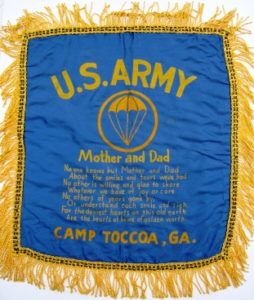 Pillow shams, or ‘sweetheart pillow covers’, were souvenirs from Army camps sent to parents, wives or sweethearts. This was an old tradition that continued during and after WW2. There are many designs, but here I focus on those related to paratroops and gliders. Usually, these items were not dated, so to be able to confirm them as WW2 and not post-war, we need to look at the names of camps and units that are used. For example, the ‘Airborne’ as an organization was mostly a post-war term. During the war, ‘Paratroops’ wanted to distinguish themselves from the glider troops. Another clue can be the existence of the camps after the war. For example, Camp Mackall was created out of nothing during the war and decommissioned before the end of the war. Camp Toccoa was open before the war, but paratroops were of course only trained there during the war, and it closed again at the end of the war.

The examples below are all about the same size (20 x 20″) and made of rayon satin fabric. Some are said to be made of silk, but that would surprise me, as silk is rather fragile. Rayon is almost as smooth, but much stronger. This size is ideal for small pillows, but rather unsuitable for framing (standard frames being mostly rectangular instead of square).

My own pillow shams can be recognized by the nicer pictures. I still see similar ones sold on e-Bay now and then, but I have stopped buying them, even though they are generally inexpensive. If you have one, please send me a picture, so I can add it to the article with your name. Any further background info is also greatly appreciated.

You can contribute too:
This article describes the pillow covers that I own or have pictures of. You are welcome to contribute with any additional pictures and information you may have.