I have been wanting to write this review for a long time, but never got around to taking the pictures for it. Today I had a day off, so here you go. This replica came on the market about two years ago and by now a lot of people have bought it. My angle is here to compare it to the real steel Garand.

Overall, it’s a replica worth its money, costing about 25-30% of the price of a real deactivated Garand. Its appearance is generally authentic, being made of real wood and metal. It feels nice and heavy, although not as heavy as the real steel. No doubt due to the use of aluminum-zinc alloy instead of steel. It is also very sturdy – no squeaking sounds like an airsoft model. Let’s have a look at the differences in detail: 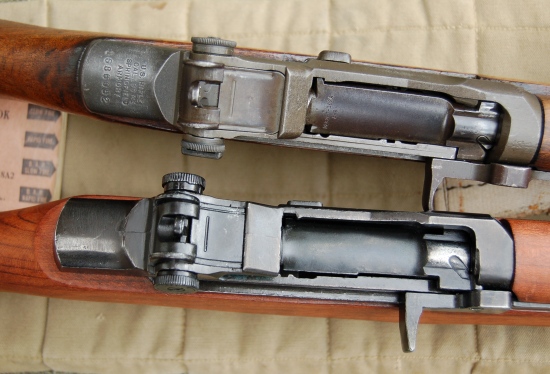 Above you can see the details of the top receiver. Note the absence of any markings. Denix has taken this critique into account when they released the MP 40 in 2009. You will also see that I have ‘aged’ the model. If you don’t do this, it looks too new and unrealistic. I advise you do this with an old peace of leather. Just rub until you get the desired wear. Don’t use paper tissues of polishing cloths, because this will buff the blackening to a gloss. That’s pretty on a Luger, but not on an M1. Here you will also notice the nice quality and color of the wood. It’s a bit reddish, but nice enough. The rear of the receiver is not flush with the wood though. You see a bit of a ledge there. I only noticed this now that I a looking at the pictures. 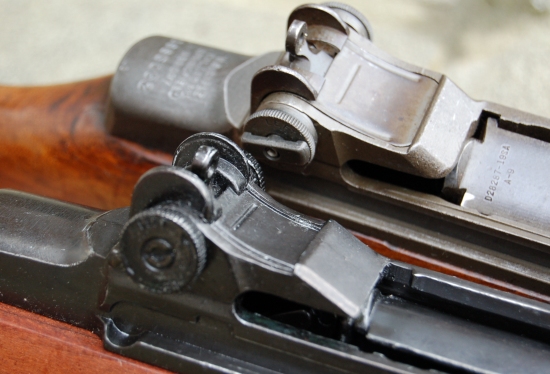 The rear sight looks quite authentic. Here we can’t really compare the pictures because the Denix has the late-war windage knob. On the real steel, you see the early type windage knob. 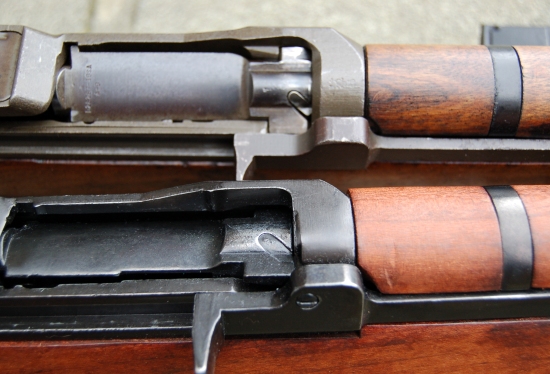 Here you see one of the more noticeable differences: the screw holding the operating rod in place. The lever really moves though, so you can actually ‘load’ the rifle. However, the replica does not take real M1 clips and it’s not possible to cycle a round. 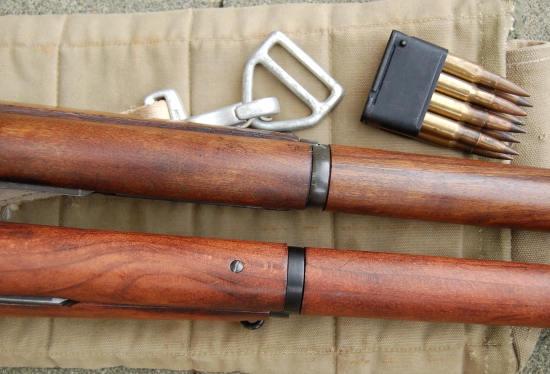 The most noticeable difference is the screw holding the top handguard into place. That’s really a pity, but it is the only thing that really stands out if you know it shouldn’t be there. 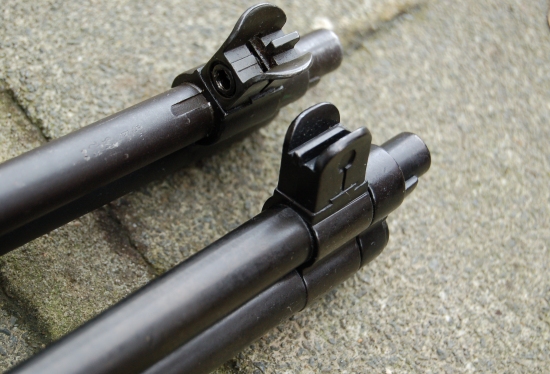 The front sight looks fine from a distance, but up close you see that they have skimped on the details. 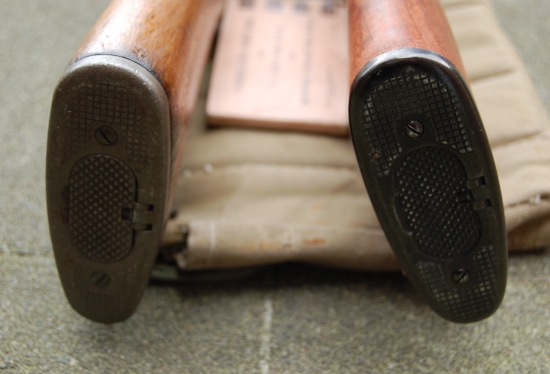 The buttplate looks really authentic, but the hatch cannot be opened. If you age it like in this picture, it will look just like it can open. 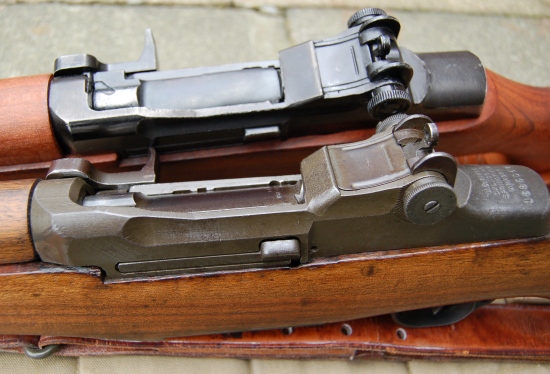 The left side of the receiver looks fine. You see the clip latch is there, but it cannot be moved.

The question most people ask about this replica: “will it take a genuine bayonet?” The answer is no. But with a little patient filing away wat the pot metal, it can work. Most of the filing is needed at the bottom of the bayonet lug. A bit less at the inside of the bayonet lug at the sides and at the front. A lot of filing is also needed on the barrel shroud. In the photos you can tell by the blank metal where I have filed. The trick is to be patient and to keep trying to fit the bayonet until it easily slips on. The last part I filed at was inside the front of the bayonet lug, so now the bayonet even clicks in place as it should. In the pictures below you see the result. Click on the photos to enlarge. 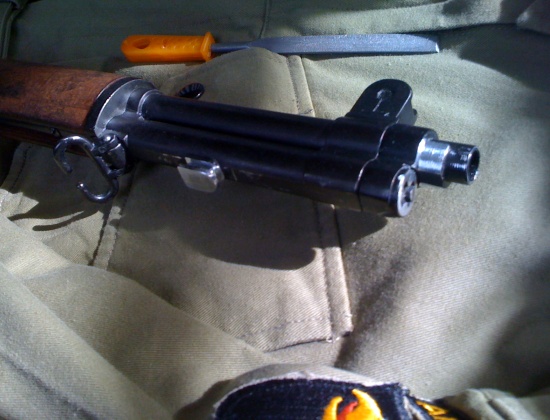 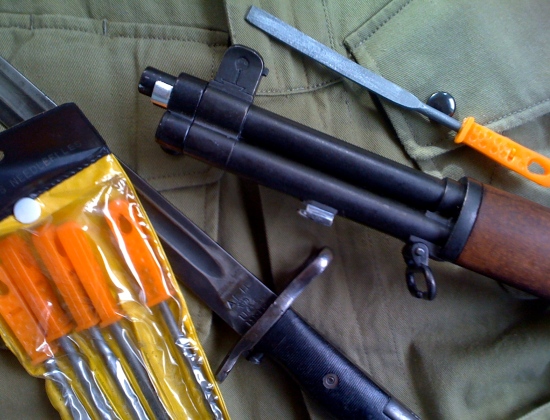 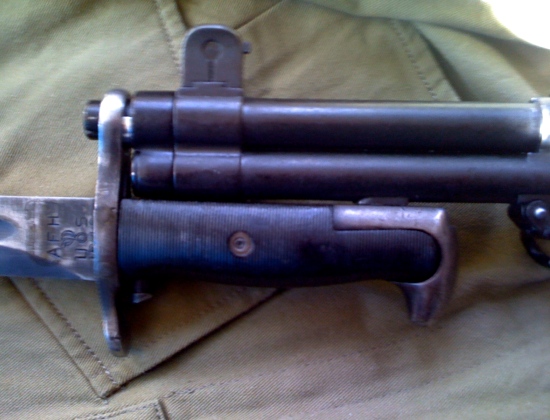 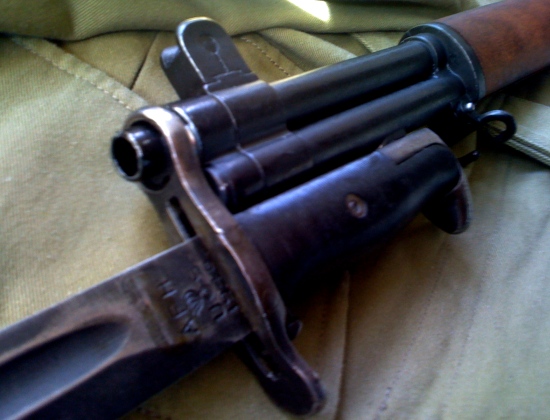 The Garand was the second WW2 rifle by Denix, after the Lee Enfield MkIII. Both rifles are very nice, especially when aged and fitted with a nice sling. The Denix Thompsons are nice too, but leave more to be desired, especially the military version which doesn’t have any sling attachments and the hand guard looks too unrealistic. I am now looking forward to new releases by Denix. On my wish list: a B.A.R. (if that isn’t asking too much) and an M1 carbine. I am pretty sure Denix will further expand their line of WW2 models, because they have been releasing new and better finished models every year.