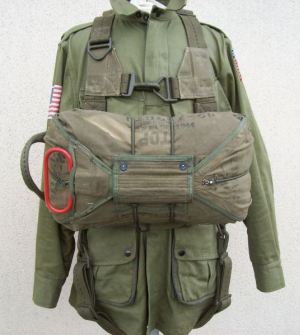 Picture from the eBay ad with OD green harness

I have wanted to mount a full paratrooper mannequin for years, but I never seem to be able to get the cash together for an original T5. An original with the canopies and risers – if you can find one – will set you back 5000 euros. A semi-original, reconstituted from (mostly) original parts is about 2000 euros. The few repros available cost at least 1000 euros without any original parts.

Jump-master44 now has a full set for 750 euros available at their eBay store, and it doesn’t look like it’s made in China. It does have a few faults, but very minor ones that are either invisible on display, or which can be fixed with a bit of handiwork.

These are the pros and cons in short. Now let’s take a closer look. As usual, click on the pictures to enlarge them.

Webbing
What sets this reproduction apart from others is the green webbing and hardware. Others I have seen all had white webbing. That’s nice if you use original webbing, but the repro white doesn’t cut it for me. The green repro webbing is very close to the orignal color, and only up-close do you see that the weave is different (I am being finicky here). For your reference I have made a photo of green and white repro webbing next to samples of original webbing.

Note that my original green webbing is a bit faded and the white webbing a bit dirty, but you get the picture. I chose to replace the white static line (white is the correct color for the static line if the harness is green) by an original which I bought years ago. It doesn’t get any better than that! If you don’t have an original static line lying around, you might try to stain the repro white webbing. I haven’t tried this myself, but I read somewhere that you can dye it with tea. First try it with a lightly colored solution, because you won’t be able to reverse the process. Detach the static line from the extraction panel first. Not a big deal for a static line, but if you have to dye and entire harness, you’d have to work with a sponge. That’s why I went for the green webbing.

The static line hook is pretty close to the original as you can see in the picture above. The other hardware of the webbing looks great too. As it’s all painted OD green instead of plain aluminum, the hardware doesn’t look as spanking new as does the bright unpainted metal on the white harness. Just a small remark about the V-ring for attaching your Griswold bag and the like. On originals, these were not attached by the manufacturer but sewn on by riggers afterwards. If you own an unissued Griswold bag, you will see it has a D-ring attached to the hook meant to be sewn onto the harness. On original parachutes, you will see the V-ring sewn either directly onto the green webbing, or onto a small piece of white webbing. Those V-rings would have been bare metal, not painted green. I may yet cut off the V-ring provided to replace it by an original as soon as I find a bit of original white webbing. Another thing I noticed was the stitching of the attachment of the chest cross-straps. I thought that on originals this was always done with large cross-stiches. Here it’s done with straight crosses (+ instead of X). You can see an example of both the V-ring and the cross-stiches on the picture of an original set below. However, after looking closely at more pictures (period black and whites), I found out they also existed with straight cross stitches. Maybe something to do with different manufacturers.

Main pack
This is in fact the least visible part when you display the set on a mannequin, which maybe why it is here that we find most of the faults. Not that it isn’t well done, far from it. Starting at the rear, you can see in the picture below that the static line is sewn onto the extraction panel. In reality, this should be a squarish hole for the static line to loop through. I will detach the static line, cut a square hole and sew the borders with a sewing machine (or maybe I’ll ask my sweet quartermaster to do it for me). The static line is folded 7 to 8 times across the back so that the static line comes out over the left shoulder. Each fold can be tucked in the loops on the side of the pack, secured by short wide rubber bands. Sadly, these rubber bands are missing. You can buy them at paragear.com, but I don’t know if the length is correct. In the picture below you see the loops and the area in red where there should have been a pocket for the inspection booklet. This is a bit annoying, but invisible on display.

Another thing that’s missing is a cord to tie the extraction panel to the main pack. It should be some kind of white heavy yarn. I don’t know the exact diameter. It would have been nice if this were included, but I found just the thing at Veritas (shop for sewing supplies etc.). Before tying it down you need to fill the pack with something to simulate the canopy. I recommend the foam as used in cushions and mattresses because it can be cut to shape and it’s very light (you don’t want your mannequin to tip over). The only visible fault is the label on the side. As you can see in the picture, the font used on the label is not correct. The text itself is correct enough, except for the June 1944 date perhaps, which is a bit late for a D-Day issue pack.

Chest pack
The reserve pack or chest pack is the most visible part when you have it on display. Fortunately this is where I have the least remarks. It’s made up of an original A4 pack. Two of the three web handles were removed (the T5 has only one) and OD green hooks have been added. The pull handle is a repro, but you can’t tell from the outside. The 6 repro elastic rubber bands, called bungee straps, are green and quite nice. Not the usual white jobs you see on other repros. But I replaced them by originals. As you see, it pays to scrounge for original parts, even if you don’t own a complete original set. The label of the reserve pack is a perfect copy of the original. The only minus here is that the reverse side does not have the two reinforcement straps, as can be seen on the photo of an original chest pack below. But this isn’t visible on display, so I only add it here for completeness.

Conclusion
You’ve had the short and the long of it. I think we can conclude that jumpmaster has done a great job. I would rate it 8/10. With a few minor improvements (stitching details, main pack pocket and label) and a few more extra’s included (rubber bands, string to close main pack), it would merit a 9/10. Perfecting the color of the white webbing will probably remain a job for the buyer.

My wish list
I would encourage jumpmaster to add new models to its offering. I still want a T4 and a T7-A (modified T5 for Holland jumps).

You can contribute too
If you have an original T5 or another repro that you want to share details about, or if you just want to give your opinion, please send me an e-mail.