Whistles were issued to all branches of the army, particularly to MP personnel and officers. The most famous is the brass Thunderer whistle, which was used by pilots who wore them on the zipper of their A-2 flight jackets. The Thunderer whistle is the only type listed in my copy of the U.S. Military Forces Supply Catalog, dated 15 January 1945. But obviously, other official issue types existed, notably the OD green plastic whistle. The brass whistles, which may also be found nickle plated, are much more common than the plastic ones. Two of the plastic whistles I have are both 1943 dated, the other one is undated and I have never seen any other year in photographs, except for the otherwise identical Navy-issue green plastic whistle, which is 1944 dated.

The whistle was mostly worn with the issue chain, suspended from the left shoulder epaulette, with the whistle hanging from the left breast pocket of the jacket. Chains existed in brass, nickle plated brass and in parkerized steel. The patterns of these chains are also slightly different (see photographs below). It appears that some whistles also had their chains replaced by a leather lanyard or bootlace, as in this photograph. I can only guess this was because chains are more noisy and less comfortable to wear around the neck. 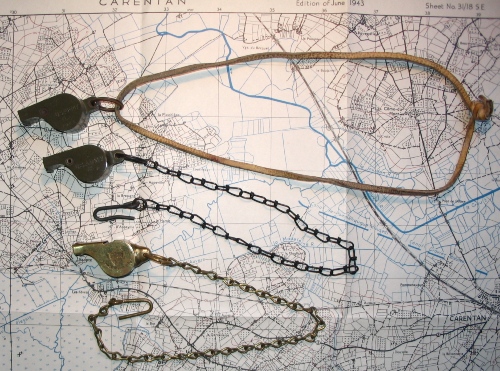 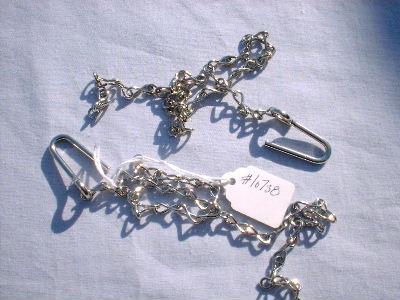 These are nickle plated chains. Note that the pattern of the chain is identical to that of the one in the middle on the picture on top. 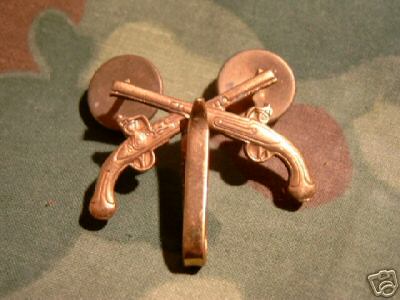 Some MPs had a special BOS (Branch of Service) insignia, worn on the left collar, which had a hook for the whistle. The one in this picture is probably not WW2 issue, I just grabbed it from eBay to show what I’m talking about. It would be interesting to get a picture of a bonafide WW2 issue insignia (if these already existed in WW2).

Here’s a side view of my whistles. 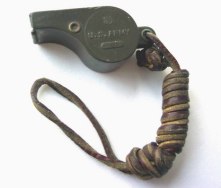 And these are the reverse sides, always unmarked. 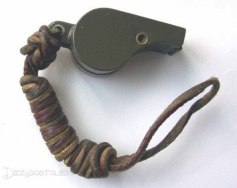 In these top views you can see that all use the same kind of wooden ball inside.

The Thunderer whistle is listed in the aformentioned Supply Catalog with the following details:

Recent additions:
It’s easier for me to just add new pictures here as they come in, instead of having to rework the article each time. I can’t ask everyone to photograph their whistles on the same background, same size etc. (besides, my pictures aren’t all that great anyway) 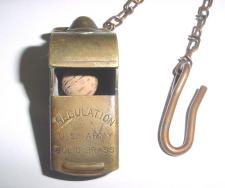 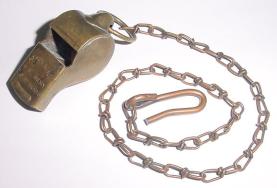 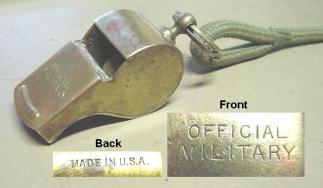 The first addition are two other brass whistles from Paul Reijnders. The design is identical to the Thunderer model, but these are obviously genuine army issue. One has a piece of parachute cord as a lanyard.

The second addition is a 1944 dated navy-issue plastic whistle. The whistle is otherwise identical to the army ones at the top. The manufacturer logo is the same as the one on my army-issue whistly in picture above. I don’t know which manufacturer that is. If you know, please let me know. 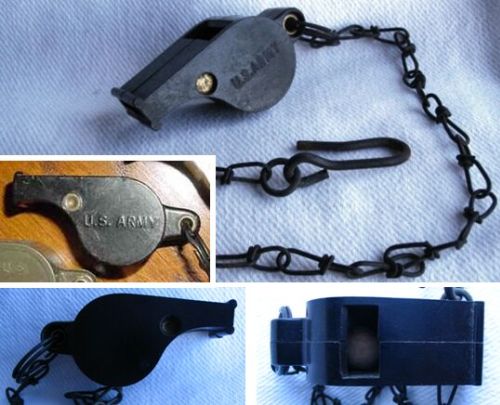 The third addition from April 2007 is this unusual black bakelite whistle I bought last summer, but I only just took some pictures of it. It is marked U.S. Army and identical to the OD plastic ones, except for the shape of the rivets. Probably another manufacturer. The center inset is of an almost identical black whistle from Paul Reijnders, almost – except for the rivets. 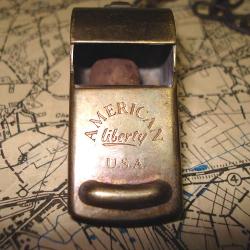 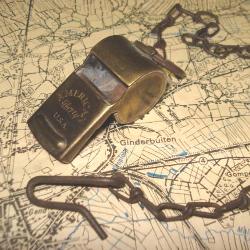 Another one from Paul, added on 18 May. Keep them coming Paul! No military markings, but identical to the other brass whistles above. Top marked ‘American Liberty U.S.A.’.

Laurent Gadreau alerted me about this orange-transparent 1943 dated US Army whistle sold at Lux Militaria. It looks identical to other OD green whistles above. I’m not sure why they would have made them in orange for the army. Presumably for training or survival equipment.

Detail view of markings and inside

Interestingly, it allows us to see the interior structure of the whistle.

Laurent Gardiau, who also sent me photos of an orange transparent whistle (see above), sent me a picture of a pink whistle, also US Army 1943 marked. It is otherwise identical to the green ones. While we could think of the practicality of an orange whistle, pink seems an odd choice of color for the Army. I have never seen one like this before. 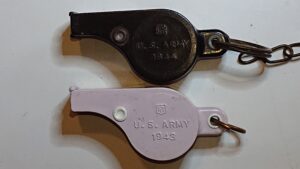 You can contribute too:
This article describes the variety of whistles that I have, but there must be more. I haven’t researched it much yet, so you are welcome to contribute with any additional information that you may have, especially pictures of other types than the ones listed here.