Over the years I have picked up a number of items specifically related to GIs in Brussels when the occasion presented itself. These mostly date from 1945 when the Americans had become well established in the capital with officers’ clubs, post exchanges etc., sports and leisure activities, often in hotels that are still around today. 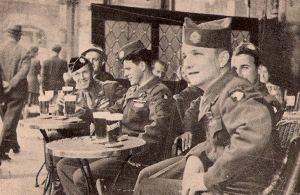 The best reading is offered by the guides made for GIs. The ‘Pocket Guide to the Cities of Belgium and Luxembourg’, printed in late 1944, covers the most interesting sights still popular with tourists today. Of note is the reference to the Palais de Justice which went up in flames during the German retreat in September 1944. The guides recommends a journey by vicinaux (“a cross between a trolleycar and a train”) for sightseeing.

The Brussels guide is more detailed on both tourist attractions and leisure activities and services. The foreword reminds the reader that helmets and helmet liners are taboo, and wearing a tie is required at all times! Following said dress code, GIs could enjoy dance every afternoon and evening at several clubs in town. “Hostesses are charming and plentiful”. Next to a list of popular tourist sights and sports and leisure facilities, the guide lists some interesting services: a writing room (the internet café of the time), sketch artists (get your portrait drawn for free!), and seven (!) Pro Stations…

Of particular note is the famous GI Joe’s club at the Fontenas square. Alas, no evidence remains of this at present as the building has been torn down since. GI Joe’s was both post exchange (PX) and dancing club. Below are pictures of it from 1945 postcards. The dancing hall with the small tables surrounding it is the typical décor for a GI soirée in the 1940s. Look at the PX counter displaying most of the cigarette brands available at the time, and the selection of magazines and souvenirs. I recently found a second set of miniature postcards with views of Brussels and Antwerp. I guess these photos are from before the war, as no damage is visible to any of the buildings, particularly the Palais de Justices, which suffered a severe fire set by retreating Germans.

What’s also interesting is that the fountain that we now know from the St. Catherine square used to be placed at the Brouckère square, in front of the Metropole hotel.

When I got this Coca Cola ad about 5 years ago, I couldn’t work out where the scene in the picture was located or if perhaps it was fictional. The fountain looked familiar, but the buildings in the background didn’t match with those around the St. Catherine square today. Much later, when reading an article about the construction of the metro network, I found out that this fountain dedicated to mayor Jules Anspach was moved from the Brouckère square in 1979, except for the bottom part. The Brouckère square, and more specifically the Metropole hotel was the place to be in Brussels at the time. This hotel is still very much in its original grandeur today. 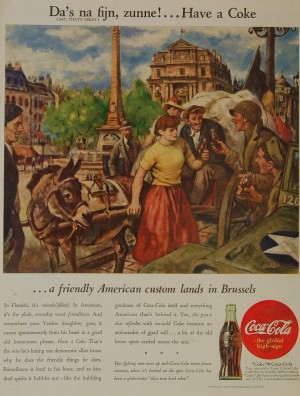 Even back in WWI, GIs and Tommies were issued langue guides and phrase books assisting in basic conversation with local civilians and military personnel, including phonetic spelling. These guides offer an interesting insight into what was important for soldiers to be able to say. For example…

The photo above shows quite a variety of issued and private purchase or donated language guides, but other ones existed, especially for French. Similar guides existed for other countries and languages and can be subject of a collection in its own right.

You can contribute too

If you have any information related to this article, such as period photographs, newspaper articles, guides, etc., please send me a photo and a description and I will be glad to add it here.