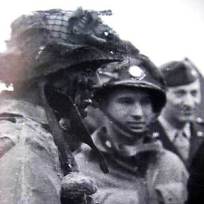 Luminous or fluorescent disks were issued on a limited scale to paratroops for the Normandy jump. These small disks were attached to the front or back of the helmet so that the men could see each other in darkness. In this article I try to give a detailed view on the variations that existed, as well as the containers they were issued in.

But first a word on who used them and how. It is often identified as a pathfinder item, but that is just talk to drive up the price in auctions. They are known to have been used by pathfinders and other paratroopers alike, so they weren’t specifically issued to pathfinders. I also have my doubts about the actual usefulness of these disks in combat.

It is true that these disks glow even in total darkness, without having to first shine a torch on them to charge them (even after more than 60 years!). With the same blackout that was in force throughout occupied Europe, we can assume that there was no ambient light that night of 5-6 June (streetlights, houses…), only German flak fire to ruin your night vision. Even so, the Normandy jump was on a full moon, so I think you would still have to be quite close to the man in front to make out the shine of the disk on his helmet. 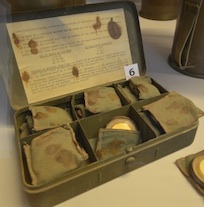 The stuff inside that glows is radium, the same radio-active material that was used in wrist watches until the 1960s when they discovered that this may be harmful, especially when tampered with. Now they use tritium, which works even better, but won’t make you look like Homer Simpson after a while. They didn’t know quite how harmful the material was, but they were careful enough to mark each disk with ‘poison inside’ (radioactive material was classified at the time as a poison for the purpose of transportation) and to ship the disks in small lead-lined containers. If you want to know more about the precise composition of the glowing stuff inside, see the links to some related articles at the bottom of this page.

Types of disks
While outwardly similar, various types of these disks intended for wearing on the person existed. I will focus here on the types used by paratroops: the tie-on type, clip-on type and pin-on type. There were other luminous disks that were larger in diameter, but were not intended to be worn on helmets. The names ‘deck marker’ and ‘bridge marker’ allude to their purpose. More details about the latter types can be found via the links to related articles below.

Tie-on type
This is the most common type, although it still fetches high prices at auctions. As with the other types, the radium center is covered by a dome-shaped glass cover which clicks into the backside, secured by two hollow rivets. The backside and rivets were made of blued sheet steel or zinc coated or blackened brass. The ties would go through the hollow rivets. The one pictured here came with a green woolen individual pouch and para cord ties. I have also seen such pouches made of lighter weight OD green cotton.

Clip-on type
This type is very rare, so more expensive. These only existed in blued steel and are mostly seen with some surface rust. In mint condition, these will cost you hundreds of dollars. The back is also marked with ‘POISON INSIDE’ and next to the clip, it can also be tied on by the hollow rivets.

Pin-on type
This type is the rarest. So rare that I didn’t have a picture of it. But you could find one in Michel De Trez’s “The Point Of No Return”. Instead of the clip, it has a kind of safety pin at the back. I am told that these were not marked ‘poison inside’, but that they have the broad-arrow mark. That would label them as British issue, or so I thought.

That was until July 2015, when Joseph Muchanski sent me photos of his luminous disk with a pin back. It is not Broad Arrow marked but marked R.L.I. 1942. Under the pin is Pat. # 2336969. It is 1 1/2” in diameter. At first I tried searching the patent number, but I couldn’t find anything. That’s because it’s not a US patent number. The disk is not US but Canadian made. RLI stands for Radium Industries Limited. See photos below.

Bridge marker
I found these pics of a bridge marker at an eBay auction. They are quite rare also, but outside the scope of this article. I thought I’d show one here anyway, just for comparison. It is larger and has a threaded bolt at the back. More information about bridge markers can be found via the link at the bottom of this article.

Eric Eaton sent me photos of screw-on type luminous disks, also known as bridge markers. They would be attached to bridges, buildings, vessels. He got this from a WW2 US Navy veteran, so presumably it would have been used on a vessel. Any further info on this is welcome! It’s the first time I’ve seen a photo of the box anyway.

The large-type disk seen below is also what’s called a bridge marker, but besides two prongs with holes for nails or screws, it also has a regular clip for attaching it to a helmet net or to webbing. I didn’t have any good pictures of it until now. The seller was so kind to let me use his photos. He sold just one disk with the felt bag for $400 on eBay. The metal box was not for sale, but it is very interesting because it solves the TYPE I vs. TYPE III mystery (see below). Apparently, this type of disks belongs in the TYPE III-marked box, which has diagonal dividers inside (allowing for larger, but fewer disks). The TYPE 1 box has the smaller square dividers for the disks that were worn on helmets (mostly). The disk has a clip like the smaller disks for attaching it to the helmet net, the uniform or webbing, and two prongs with holes for nails. It is marked “USRC UNDARK 22m-TTR58 4-45 POSION INSIDE”. This was made April 1945.

Reproductions
Everything gets copied, so why not luminous disks. I can’t really recommend any of them as accurate copies, so better save up for one decent real one. The one in the pics below is from Milforce. It’s the clip-on type and it comes with a pouch.

Types of boxes
As mentioned above, the disks were issued in lead-lined sheet metal containers. These are of course even harder to find than the disks themselves. I know of two types. They are virtually identical, but there are some small differences. Both were made by the U.S. Radium Corp., but stating different PO numbers.

TYPE I
The lid is stamped with TYPE I, otherwise the text of the stamp is identical to the one on the Type III box. From the side, you can see small protrusions, which are in fact slots for the internal dividers. These dividers are missing in my own box, but from pictures of other Type I boxes, I know that these are straight, leaving six spaces. The label on the inside of the lid has crumbled away. I have pieced-together the parts of the label for this photo. Again, this label is the exact same as in the type III boxes. Note that the lead lining has dried out and is completely disintegrated.

TYPE III
This box does not have the protrusions on the sides. The lock button is the same as on the Type I box. Inside is the exact same label, but the metal dividers are placed diagonally instead of straight, leaving only 4 slots instead of six. These slots are larger, so maybe this type of box was for the larger bridge / deck markers? I don’t know. The question is also if there ever was a Type II box.

Unmarked
I have never seen a Type II box, but Paul Reijnders sent me these pictures of an unmarked box. It does not have a stamp on the outside, but otherwise its appearance is identical to the Type I box (protrusions outside and square dividers inside). Inside, the label has the same text, but a different font is used. Maybe a different manufacturer?

None of these boxes are dated, but I would assume that the first type is the earlier version. This box is slightly more intricately made, but only in that it has the slots for the dividers. Any more definite theories are always welcome. The PO numbers could also be a clue for dating these items, but I am not familiar with these codes.

Modern ‘cat-eyes’ and IFF patches
After discontinuing the issue of luminous disks sometime in the 1960s (as far as I can tell), a new type of luminous marking of helmets for night-time manoeuvres was again introduced in the 1980s for the then newly developed PASGT helmet. The picture on the left shows a helmet with an early ‘chocolate chip’ desert camo cover and an OD green elastic helmet band with two luminous ‘cat eyes’. These do not glow in the dark by themselves and have to be ‘charged’ with a flashlight. A later type (not shown here) has yellow reflective cat eyes. The latest ACH/MICH helmets have a flap at the top which can be opened to reveal a so-called IFF patch (Identification Friend or Foe). These are used for recognizing friendly troops from the air. Similar patches exist for wear on the uniform. You can see an example in the picture on the right. Click on the image to go to the website where I found it and find out more background on this.

You can contribute too:
This article describes the variety of disks that I have, or have pictures of. I am especially interested in an explanation of the difference between the Type I and Type III boxes, and in the possible existence of a Type II box.

I have been collecting WW2 militaria since I was a boy. About ten years ago, I decided to focus on WWII US Army, specializing in the history and equipment of the US Paratroops.

This French 3rd Zouave badge is an actual WWII iss

I received this beautiful book as a belated gift f

Post-war souvenir cigarette case with a map of the

Today is the 76th anniversary of D-Day. Here’s a