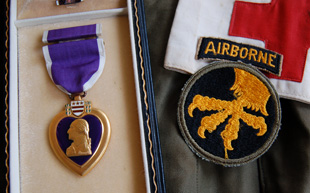 Last weekend my dad gave me the original of the photo you see here. I already had a scan of it, but now it turns out that there’s a text written on the back. The handwriting says that this picture is Jack Beatty before joining the 17th Airborne as a medic, and that he was killed after the Wesel drop while tending to a wounded comrade. A purple heart was sent to his parents posthumously.
Now what does this have to do with me?