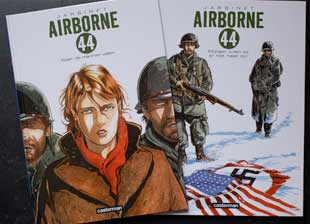 This month, these new comic strips were released in Dutch. I looked forward to it because it combines my two great passions: paratroopers and comic books. These aren’t the first comics with paratroopers in them, nor about the Ardennes offensive, but certainly the best so far. The artist, Philippe Jarbinet, has really gone out of his way to make his drawings as realistic as possible. His eye for detail certainly adds to the enjoyment. The foreword says he was assisted by Philippe Gillain, the curator of the Historical Museum ‘December 1944’. The story follows a trooper of the 505th PIR through the woods in the snowy Ardennes. It’s a war and love drama, but I won’t tell you the plot. I hope that we will soon see another album in this series. Here’s an article (in French) where you can find more information.