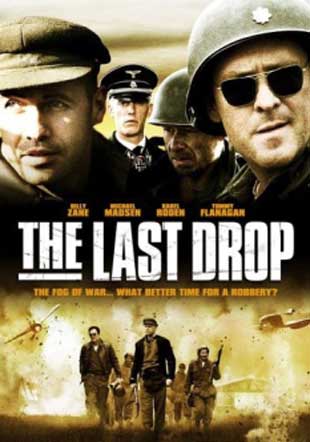 I got this DVD for my birthday and only just watched it this past weekend. The title and description were promising: something with British paratroopers in a secret WW2 operation. But the movie sucks every way you look at it. The movie starts out with a console game quality (not silver screen quality) 3D animation of a train of C-47s towing Horsa gliders. Then we are treated to a mix of hard to understand Cockney, Irish, etc. accents which I assume were intendend to add to the realism of the colorful mix of British glider troops.

It gets really bad when the Americans come into the picture. Michael Madsen, who we all know from Reservoir Dogs, plays a 101st Airborne Major. Absolutely no effort at realism has been done when it comes to his uniform. He wears Vietnam era pilot’s sunglasses, some type of postwar belt and helmet, and lateron he even wears a Belgian officer’s cap with a US eagle device on it. Not to mention his Elvis-type hairdo. His fellow paratroopers wear embroidered 50-star arm flags. More uniform goofs in this movie can be found here at IMDB.

All that may be forgiven if the storyline were surprising or funny, but even Allo Allo had a better plot about art treasures stolen by the Germans. I rest my case.