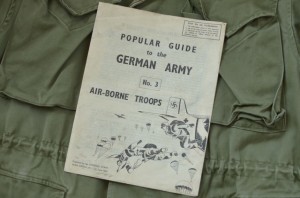 I recently acquired this very rare pamphlet that was originally issued to members of the British Home Guard as of June 1941. It lays out possible scenarios of the Germans trying to get a foothold on British soil by use of parachute and glider troops. Members are warned that it’s best to nip the German airborne threat in the bud: “if vigorously attacked they may quickly surrender, but those who are allowed to consolidate become dangerous”. For you interest, I have photographed the entire pamphlet. Download your copy here and enjoy reading.