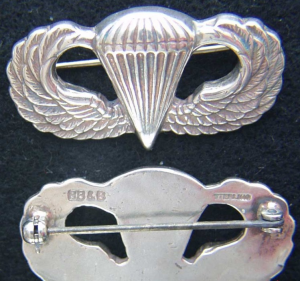 The makers of the first 350 jump wings were Bailey, Banks & Biddle Company of Philadelphia. All of these first wings bear BB&B on the back and they are a rare collector’s item. I just wanted you to know that recasts are now turning up at eBay, also of other rare maker versions such as Sugarman. The current seller honestly lists them as repros, but they are really well made and might later be sold as originals.