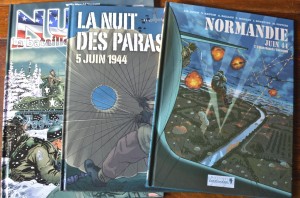 I recently bought these comic books at Amazon. WW2 comic books have seen a real boom the past 2 years. Most of them are WW2 aviation related, but some are specifically airborne related, so they deserve to be mentioned on this blog for paratrooper enthusiasts.

For starters, all three are in French. I would have gotten them in Dutch, but La Nuit des Paras and Normandie came out at a very small publisher in France and aren’t even sold in Belgium, let alone translated. They deserve to be though, as both are worthwhile illustrated accounts of the British and American airborne part in the Normandy invasion. Nuts! is in fact a reworked reprint of a book from 1991. The old edition also exists in Dutch. It is about the Battle of the Bulge as you might guess from the title.

This is not the first post about new paratrooper related comic books, so I added a new section for it within the book reviews section.