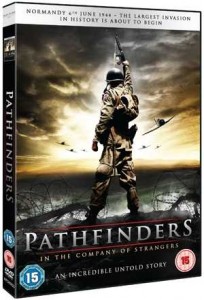 ‘Pathfinders – In the Company of Strangers’ is a movie from earlier this year and now released on DVD. I hadn’t heard about it, but when I saw it on display at the bookstore, it looked interesting. Pathfinders and their equipment are the most intriguing aspect of airborne history, so I was hoping to catch a glimpse of custom pathfinder uniforms, bags, Eureka beacons, Aldis lamps etc. And sadly, a glimpse is all I got. But far worse was the movie script and the poor acting. It’s really dull and not worth your money. If you can get it cheap next year or so, I still recommend you buy the DVD, because it includes the 55-minute documentary ‘Geronimo’ about US paratroopers in Normandy, which is far better than the movie and does include interesting period footage and interviews with veteran paratroopers of the 101st and 82nd Airborne. Kind of like the interviews that the Band of Brothers episodes start with.