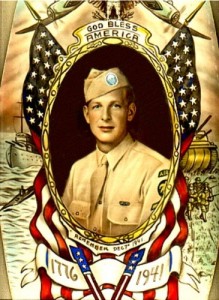 Bill Morris sent me a link of a site he’s working on in memory of his father, who was a pathfinder with the 517th PIR. He’s still working on it, but it already has some interesting parts:

The 517th was a ‘Special Ops Team’. During their 150 days of Combined Combat, they were attached to the 82nd, 17th, 13th Airborne Divisions and several other Units as needed. They were nicknamed “The Firemen”.

And there’s a Belgian angle to it too: In Jan, 2012, Jean-Louis Seel from Aubel, Belguim found his Website and emailed him stating that he had recovered his fathers dog tags near the town of Manhay, Belgium in 1988. During The Battle of the Bulge, the 517th Captured Manhay on Dec 27, 1945. Robert was wounded in the Battle 7 days later.