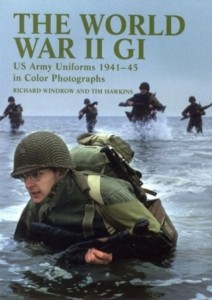 Richard Windrow is a life-long military modeling hobbyist and Tim Hawkins is an experienced military photographer. 144 pages, full color front to back with professional full-page photos of re-enactors wearing all kinds of original US Army uniforms, weapons and equipment. The makers have gone out of their way to shoot the photos on location. So mountain troop uniforms are in the mountains, with snow, and the Rangers are on a beach and assembling a ladder against a cliff. I particularly like the photos of GI’s on leave in Britain. This book does exist in hardcover, but I think it’s out of print. It’s a great book to drool over and if you’re a re-enactor, it will probably give you ideas. Worth every cent (or penny)!