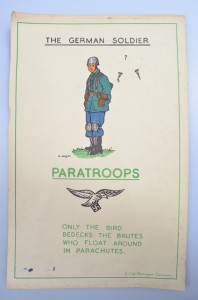 This pamphlet is one of a series issued by the Northern Command, which was the Home Command of the British Army. I only bought this pamphlet showing what a German Paratrooper looks like. It’s the early Fallschirmjäger with green smock, blue trousers, grey helmet and brown leather field gear.

Below is a small rime, apparently supposed to underline the brutality of the German Paratroopers:

Only the bird
Bedecks the brutes
Who float around
In parachutes