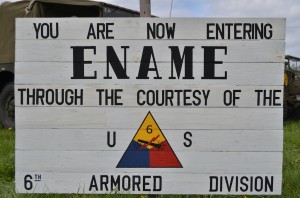 The weather was great for this 2013 edition of Camp Lucky Strike at Ename, Belgium. The turnout of vehicles was mostly the same as on last year’s Wings & Wheels, but it included no less than 3 tanks (!), a DUKW, a Seep and one I hadn’t seen before: a truck with a disassembled Piper Cub reconnaissance plane.

Firing baseballs with a mortar was a real hoot! My son and his friend had a great time.

Take a look at the photo album