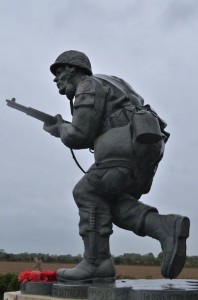 Here are the photos of my Normandy trip with some friends last weekend. We stayed at Le Grand Hard, at Sainte-Marie-du-Mont. I can really recommend this place. It is run by a really nice couple from Belgium, and the food is really good too!

Highlights of our trip were the Airborne museum, Dead Man’s Corner, the American and German cemeteries and Pegasus Bridge. The American cemetery was closed on account of the shutdown, but this did not deter us. We entered by way of the dune path, and apparently we weren’t the only ones with that idea. Imagine coming all the way from the States and finding the place closed… We also visited the beaches at Utah and Omaha, and the remains of the artificial harbor at Arromanches.

It had been a few years since I last visited Normandy, and I was glad to find some new things: a number of monuments to the 101st Airborne (one of which near where we stayed), a statue of Dick Winters and the extension that is in progress at the Airborne museum at Sainte-Mere-Eglise. The Overlord museum is new too, but I didn’t go inside. At Arromanches, there’s also a small new museum. So plenty of reason to come back another time!