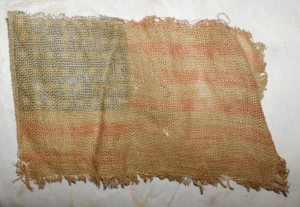 I bought this one a few weeks ago. I had wanted to get an original for a long time, but I never found one, until now. That’s why I was prepared to pay for one in such poor shape. It looks like it has been torn from a jump jacket. The left still has the stitching, the other sides have just been torn off. It still has its 7 stripes though. These flags are larger when new (they have a white border), but they were printed on sheets and cut out, as you can see in my article on invasion arm flags. Even so, this type of flag is smaller than the cotton arm flags used by gliders on D-Day, and by others in later campaigns. On the rare pictures of these gauze flags, even in reference books, you can see they are a lot smaller compared to the cotton arm flags. The size of this one is 9 x 5.5 cm. Uncut, the size would have been 12 x 7 cm, including a white border.