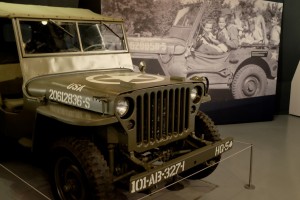 In May I visited Bastogne for a weekend with my son. We revisited the Bastogne Historical Center which has been completely transformed into the Bastogne War Museum. It has been enlarged and the collection pieces have changed. Some of the good pieces (generals’ uniforms for example) have disappeared, but many new quality items have been added. Some very fine vehicles, such as a Sherman tank with a hole in the hull through which the interior can be viewed, a beautiful Hetzer and a mint condition Kübelwagen.

The best thing of the tour is the audio guide with voices of people from Bastogne during the war. Most notably Emile, whom we follow through the story of the liberation at first, and then the German counter attack, the siege of Bastogne, and finally its re-liberation. The illustrations by Philippe Jarbinet and the animated diorama’s are incredible, especially the café with its basement used as an air raid shelter. This is really up to the standard of the Imperial War Museum, and then some!

The only criticism I should give is that the museum does not limit itself to the war at Bastogne, or even the Battle of the Bulge. It explains the rise of National Socialism, the war in the Pacific etc… This may be educational to the general public, and school children, but it would be much more valuable to focus on the Battle of the Bulge and display more items relevant to that.

See photos for an impression of the museum and the rest of our Bastogne weekend.