↓
Home→Collectibles→British and Italian variants of the TL-122 flashlight 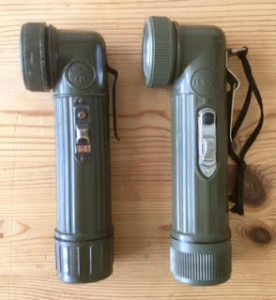 Tony Fitzgibbon sent me this picture of two TL-122 style torches I hadn’t seen before.

One is an RAF torch marked 5a/ 9105033 with a Broad arrow and the other is an Italian Pagani torch marked TL-122-C. You can see the Italian one has an eyelet for attaching a lanyard above the belt clip.

In the gallery below you will also find detail pictures of all the markings. Note that the British torch was actually manufactured in Britain, and the Italian one in Italy.

The British one has the broad arrow mark. G.E.C. stands for General Electric Company. It is their post-1921 logo, but I can’t say this makes it a WW2 issue flashlight for sure.

The Italian one seems to be of late- or post-war manufacture, due to the TL-122-C marking and the added refinements which may be an Italian trait, but certainly don’t point to wartime standards. Fratelli Pagani Spa. in Milan used to be a battery factory that also made the first electrical flashlights, or so they claim on the VELAMP website, the company’s name since 1972. After WW2 they started making flashlights for other well-known brands too.