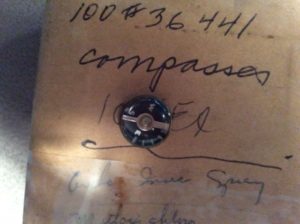 Bruce Hollyn sent me this photo of a tiny escape compass. I had never seen one like this before, so I asked where he found it. Bruce told me he was in the USAF and during a inspection from higher HQ they were cleaning up and properly sorting inventory, which was according to the normal procedure. His intelligence officer stopped by their shop and gave him a box, saying they were no longer needed. As Bruce taught survival at the time, the officer thought his team could use them. There is no markings on these compasses at all. They are smaller than a penny in size, which makes them smaller than the average escape compass (see sizes in my article). From where they were found, I think we can safely assume they are US made, and definitely US issued, but hard to tell how old they are. They could be USAAF, so WW2 originally, but they could just as well be post-war. As always, we’d be interested to find out more about this type of compass if anyone knows.
Read the full article on escape compasses