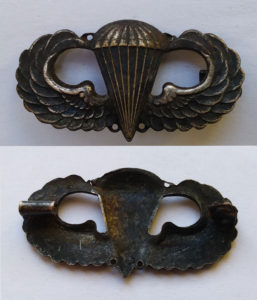 Kamil, a collector from Poland bought these very peculiar jump wings off a roof repair company who found it at an attic in France.

The holes are at the top and bottom seem to have been intended for sewing the wings onto fabric. I haven’t seen this before. The holes (or loops rather) don’t look like they have been welded on, but seem to be integral part of the wings. The latter would mean that these wings were cast with the loops, which would surprise me because then, why would they have kept the attachments of the clasp at the back if it was intended for sewing on?

It looks like the badge is made of silver. It’s quite dark in the photos so it could well be.

If anyone has ever seen similar jumpwings or has more information or ideas about this, please comment.