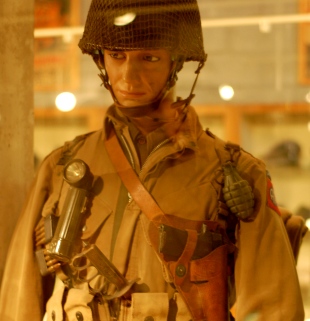 I must have been a teenager when I last visited this museum at La Gleize in the Ardennes. It is one of the many museums in the area about the Battle of the Bulge. Most started as private collections that grew into museums open to the public. Some larger than others. All of the ones I have visited have American and German mannequins, but most focus on a particular part of the Ardennes offensive. Dezember 1944 focuses on the battle at and around La Gleize. Nearby is the famous village of Trois Ponts, where the 505th PIR of the 82nd Airborne managed to push back the advance of the Leibstandarte Adolf Hitler of the 1st SS Panzerdivision.
I visited the museum again last weekend, and found it pretty much as I remembered it. Quite small, but with some interesting pieces. To name a few: 82nd Airborne uniforms and helmets (which were mostly unmarked by the way), M1 and M9 bazookas, a 75mm pack howitzer, a white tongue 101st Airborne patch, some M1A1 carbines, and an SS paratrooper with a spotted camo jumpsmock (Knochensack). I am no specialist at that, but I think that must be very rare. This is the second museum with a repro FG42 on display (the other one is at Ambleteuse in France). This repro is really awesome, and perfectly acceptable to show in a museum, but I think they ought to point out that it’s a copy. Anyway, the museum is really worth the 5 EUR visit. But don’t buy the guide in Dutch, which is another 5 EUR. The translation is terrible.