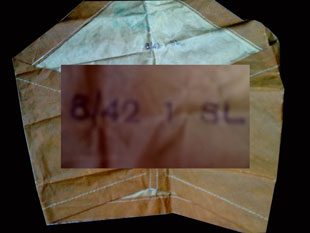 This photo was sent to me by Paul Smith. His brassard looks authentic, but he was wondering about the color of the ink of the stamping inside. This was an aspect I had not considered when I first wrote the article. But when comparing his picture to others I have on file (yes, I am one of those tireless auction pic hunters), I found another one with the marking in purple ink. Also including ‘SL’ in the code. I still have no clue what these codes stand for, except for the month/year part. I surmise that ‘SL’ is the manufacturer code and that the ink was originally black too, as on the others shown in my article, but that the ink discolored over time. You may have noticed similar discoloration from black to purple on WW2 period documents. So I am putting it down to a different ink used by that particular manufacturer.
Full article