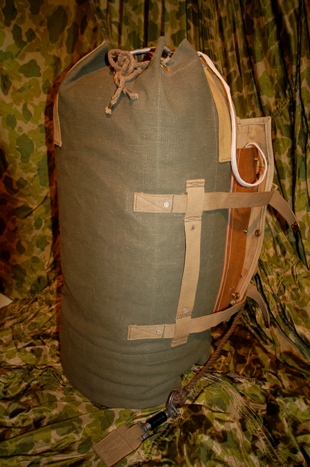 I ordered this leg bag from The Military History Workshop back in November. These are the people who made them for Band of Brothers. Most orders are custom made, so it takes about two months, but it’s worth the wait. This reproduction British-made type leg bag is a dead ringer for the original. I compared it to good pictures I had on file from an original, and it is amazing. The same material (rivets, fabric, felt, rings, press studs, everything). It came with a reproduction quick release buckle, but I managed to find an original to replace it, so now it is as good as indistinguishable from an original. If I really must name one gripe, is that it is in unissued condition with just the slightest aging done to some of the khaki webbing and the white release tape. The brass rings also need to dull a bit with age, although they are not shiny. But come to think of it, a leg bag should look unissued when you put it on display on a mannequin with a parachute. That’s because US paratroopers never got to train with these bags prior to the Normandy jump (which is why so many lost their leg bags and all the equipment in it during the jump), and because these bags were discarded after the jump. So, in conclusion, and perhaps for the first time in any of my reviews, I have to say that this reproduction is perfect! The price of 200 GBP (plus about 50 for an original quick release buckle) is also very reasonable, especially compared to the 5000 EUR you can expect to pay for an original (if you can find one).
View the photo album