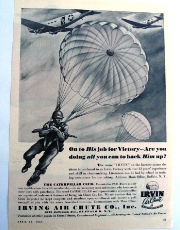 Jim van Ommeren sent me this explanation of why this ad is signed by Irving Air Chute Co., whereas the logo reads IRVIN, without a G. Apparently this is a misspelling of the company name. The founder of the company was called Leslie Irvin. When he registered his company in the trade register, the clerk wrote Irving (with a G), but the company logo did have the correct spelling.

Irvin had started manufacturing parachutes long before the war. At one point, he supplied parachutes to about 80% of the world’s air forces. He also had other factories in various contries. Before the war was out, he moved to England. After the war, he had the name Irving changed to IRVIN. I.A.C. = Irvin Air Chute.

Thanks for clearing that up Jim!