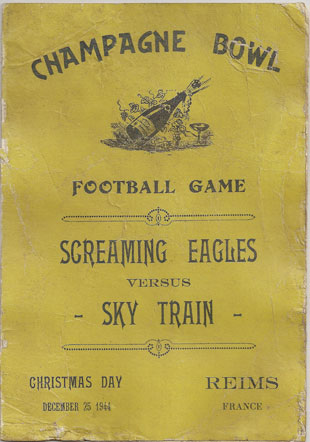 ought this on eBay from a seller who had several of these. I think they sold out on the first day. That’s because this is in interesting find. More interesting than you would think at first sight.

It looks like this is the cover of a programme or a menu for the occasion of the “Champagne Bowl” (as in Super Bowl, Cotton Bowl…) – a football game between the Screaming Eagles and Sky Train teams. At the end of 1944, after Market Garden, the 101st Airborne was stationed at Mourmelon, right near Reims, which explains why the game was held there. Sky Train would have been the name for the team of USAAF personnel riding the C-47 ‘Sky trains’ transporting paratroopers into battle.

What’s so striking here is the timing. Who of the Screaming Eagles stayed behind in France to play and celebrate while their buddies were freezing their toes off near Bastogne that very Christmas Day of 1944? My guess is nobody. These covers were probably printed well ahead of Christmas. On the evening of December 16, the start of Hitler’s counter offensive in the Ardennes, all passes at Mourmelon had been cancelled. On December 18, 11.000 men of the 101st were sent to Belgium. And that would have been the end for the Champagne Bowl.