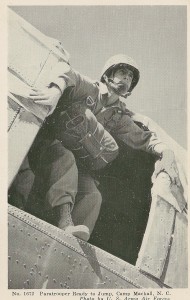 This set of WW2 postcards depicts paratroopers and glider troops training at Camp Mackall, North Carolina. These look like pictures from 1942-43 because the paratroopers no longer wear the early boots with a reinforcing buckle around the instep, and they use the T-5 parachutes instead of the T-4’s used in the early days. Or do they? Picture No. 1672 shows a second rip cord at the paratrooper’s right shoulder, so it’s a free-fall parachute and neither a T-4 nor a T-5, which were both static line parachutes. Can anyone enlighten me on that one? Only the photo marked No. 1679 seems to be from an earlier date. These even look like the so-called air infantry. The men wear the old M-1917 type helmets and no jump boots (looks like they wear gaiters) and I don’t think I see any parachutes. Maybe someone can tell by the markings on the plane?