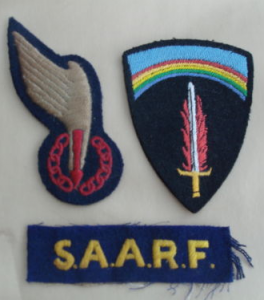 This new addition to the jump wings page is very special in that it was issued to maybe only 100 Americans for a unit that existed for only a few months. The Special Allied Airborne Reconnaissance Force was formed in March 1945 and disbanded in July. I had never heard of it before until I did some research when I saw this lot offered on eBay (see picture). It included an original SAARF wing, a reproduction SAARF title and an original SHAEF patch. The wing looks good to me, but I don’t have any good reference pictures.

More information about the history of the SAARF and its insignia can be found here on insignia.org