The long awaited folding stock M1A1 paratrooper carbine reproduction from Denix is out now. Like the regular Denix M1 carbine, there’s the early and late version (with fake-adjustable backsight and bayonet lug). See photos from the Denix website compared here. 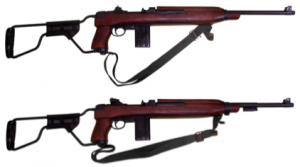 I was not too excited about either of the Denix M1 carbines and have not bought one. First they released the late version, and then the early version, but the early version has the late safety lever, instead of a push-through safety bar. What I also didn’t like (and their M1 Garand has this too) is a visible screw holding down the top handguard.

Still, I think I may buy an M1A1, but I want to see what the folding stock looks like up-close. From the photos available now, I can’t tell. If anyone has got one, please feel free to comment on this.