Tony Rudenko sent me pictures of 2 variations of the TL-122-A that I hadn’t seen before: 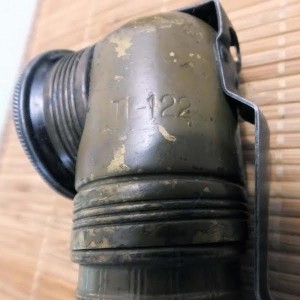 There’s a TL-122 (no suffix) type number which is stamped into the housing. The number is not set in a circle, as is usually the case. This version has metal wedged around the glass so there is no way to replace it with a new one. The lens ring with its ribbed rim is unlike the two other types in my article about the TL-122s.

Another difference that really stands out is the belt clip. It is attached to the back with to rivets, but it also extends to the top, where I think it is also rivited.

It takes a regular threaded bulb (as do the other TL-122s). 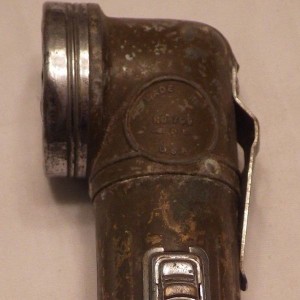 And there’s one that looks like a TL-122-A, but is marked No. 709. Never heard of this type designation before. But other than that this flashlight looks like a regular TL-122-A. It is painted OD green and the the brand is Niagara, which was one of the military contractors. I also have a later plastic TL-122-D made by Niagara.

The only thing besides the type no. that differs from other TL-122s is the switch.

If you have a variation that’s not in my overview of the TL-122 flashlights, mail me your photos.