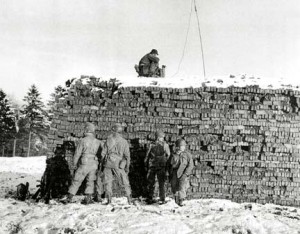 101st Airborne Pathfinder PFC ‘Jack’ Agnew kneels atop a brick pile within the Bastogne perimeter, as he activates a Eureka beacon to guide in the first wave of C-47s during the re-supply mission on December 23, 1944.

The AN/CRN-4 beacon was reportedly used in Bastogne, but I can find no photographic evidence or first-person testimonials of it. My interest in this topic was renewed when reading “Bastogne” by Peter Schrijvers and finding an original 1944 handbook of the AN/CRN-4. This gives a more detailed look at the beacon’s components, such as the transmitter, the battery, the antenna and padded bags. As far as I can tell, the well-known photo of a beacon in use at Bastogne (right) is not a CRN-4, but a PPN-1. I can tell by the typical shape of the antenna compartment of the drop bag and the antenna. Both the bags (2) and the antenna of the CRN-4 look much different.

However, this isn’t the only rare type of beacon that I have found wartime dated manuals for. Next to the better known AN/PPN-1 and PPN-2 Eureka beacons, the United States developed other portable radio beacons for guiding aircraft to drop zones. The PPN-1 was used in all WW2 operations. The PPN-2 was only used in Operation Varsity. The PPN-1 is very rare and only a handful of sets (if that) are known to have survived the war. PPN-1 accessories are also very rare. The PPN-2 is also quite rare and expensive, but more of these survived. 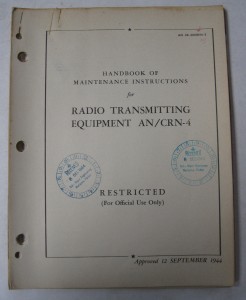 Cover of the AN/CRN-4 handbook of maintenance instructions 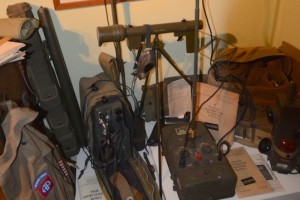 The so-called BUPS beacon is another mysterious piece. In reference books you will only find the antenna and its padded drop bag. It’s very rare, and I only know of about 5 collectors and museums who have one. But it’s unclear whether these were actually used, and where and how. I have a manual for the AN/UPN-2, as seems to be its official nomenclature, but the antenna itself is unmarked. The advantage of the BUPS beacon is its much longer range than the PPN-1 and 2. The BUPS telescopic antenna is much taller than that of the other beacons. According to literature on Operation Overlord, only 2 BUPS beacons were used on D-Day. When you look at this video, and that’s also what I get from the manual, the BUPS antenna is more like a spool, so not telescopic.

I also have a manual for the AN/TPN-2. This would still qualify as a portable beacon, but it looks much larger and heavier than the PPN-1 or 2 or the BUPS.

As I find out more about this subject, I will dedicated a full article to it. If you have more information, please send me an e-mail.

I have been collecting WW2 militaria since I was a boy. About ten years ago, I decided to focus on WWII US Army, specializing in the history and equipment of the US Paratroops.

I received this beautiful book as a belated gift f

Post-war souvenir cigarette case with a map of the

Today is the 76th anniversary of D-Day. Here’s a

Small pack of cigarettes as included in ration pac