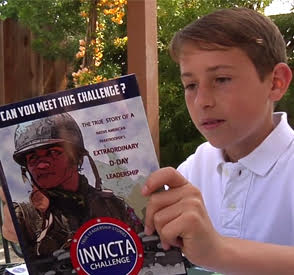 INVICTA Challenge is a new game and toy brand for kids about leadership and history. The first game is based on the true story of Turner Turnbull and the 82nd Airborne in Normandy.

Turner Turnbull is largely unknown, but his leadership had an outsized impact on the D-Day invasion, especially for the paratroopers at St. Mere-Elise. Turnbull and his platoon defeated over fifty times their number of Germans on D-Day, in holding the small French town of Neuville-Au-Plain.

Neuville is just a few miles north of St. Mere-Elise, which was hard pressed throughout June 6 from a concentrated German attack from the south. St. Mere-Elise lay alongside the roads the led to Utah Beach, so holding it was vital.

The Turnbull story was also one of the inspirations for “Saving Private Ryan”, as Turnbull’s platoon sergeant was Bob Niland, one of the four Niland brothers.

The art is photorealistic, based on a photoshoot with a group of World War II re-enactors in northern California. The game comes with a collectible sic inch paratrooper figure, and ties to a free-to-play interactive game, where you fight the tactical battle.

The game is available on Kickstarter for a limited time