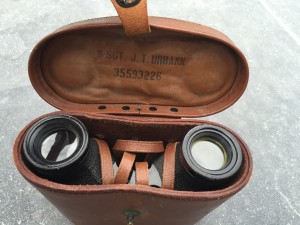 I recently bought this named case with binoculars at an auction. The name and serial number are those of staff sergeant John T. Urbank, a paratrooper who jumped into Normandy with the 3d platoon Co.’G’ 501 PIR. Urbank led the mortar squad and was usually the jump master, although I don’t know if he was on D-Day.*

My online search on this name quickly led to Mark Bando’s “Trigger Time” site, where I found a copy of a list of equipment for D-Day made by John Urbank on a V Mail form.

John (Jack) Urbank was born in Ohio in 1922 and enlisted at Akron, Ohio on November 30, 1942. He was a sergeant at Normandy and from what I can tell from George Koskimaki’s book “Hell’s Highway”, he had made staff sergeant either before or after the Holland jump. He got wounded at his hands in Holland and was hospitalised in England. I have not yet found any direct evidence that he was there in Bastogne, but I will keep searching.**

* John’s cousin Gary sent me an e-mail to say that John was not the jump master on D-Day. That duty was taken over by a lieutenant, although he does not recall his name.

** Also, Jack was returned to his unit shortly before Bastogne.