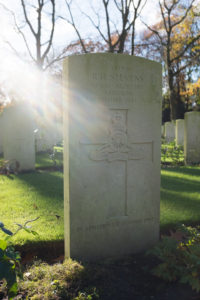 The Airborne Cemetery in the autumn sun

The Arnhem Oosterbeek War Cemetery, also called the Airborne Cemetery, is a British war cemetery that mostly contains graves of airborne and glider troopers. They were mostly British, but also many Polish and some other nationalities enlisted in the British airborne forces. In the back near the cross are the graves of other troops.

Note the grave of a Dutch parachutist and an example of grouped headstones of crew members of a plane who died together.

I photographed the unit insignia on the headstones.

It’s only 5 minutes from the Airborne Museum in Oosterbeek, and you should really visit both. In the autumn light and yellow leaves, the place looks really beautiful.