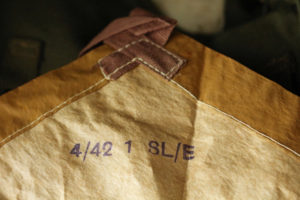 Kenneth Benteyn sent me a photo of his gas detection brassard which is in new condition.

As can be seen in the photo the marking 4/42 1 SL/E is nice and clear. 42 would be the year of manufacture, which can be deduced from the numbers on the other brassards, so 4/42 would be April 1942. SL the manufacturer? And E the lot code? We still don’t know for sure. Kenneth says he also could have bought a brassard with the same marking, but with an extra F added at the end.

I am amazed by the number of different codes that appears to exist. From the codes I have been able to gather from different collectors over the years, we can at least conclude:
– They were made from December 1939 to May 1944
– There were at least 5 different manufacturers

Refer to the list of codes in my article about WW2 gas detection brassards.