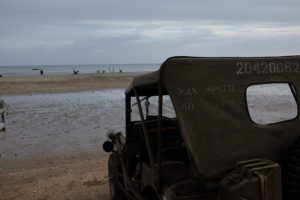 France has put in a request for the D-Day landing beaches at Normandy to be listed as a Unesco World Heritage site. This was announced by the ministry of Culture this week. The candidacy will be evaluated by Unesco in July 2019.

The area would cover the entire seaboard of about 80 kilometers from Ravenoville at the West to Ouistreham at the East.

As readers of this website will agree, this sacred ground and beautiful landscape fully deserves to be listed as world heritages site. When this happens, we can expect to see an extra impulse of tourism for Normandy. This will come at a welcome moment. Tourism will continue or grow up until the 75th anniversary of D-Day, and probably again at its centennial, but besides that attention is likely to wane, as we are already seeing in the West of Belgium with the commemorations of WWI nearing their conclusion this year. This recognition by Unesco, along with several new and improved museums in the area will make it ready for the future.

According to the region, every year nearly 2 million tourists visit the landing beaches of Utah, Omaha, Gold, Sword and Juno Beach.

In the coming weeks, I will be doing some posts of my Normandy trip last fall, which I haven’t had the time to do yet.