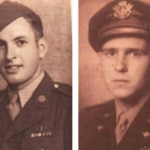 In a post on July 2015, I first wrote about SSgt. John (‘Jack’) Urbank after buying his binoculars. I haven’t been able to find out a lot more about him since then, except for the well known packing list for the Normandy jump that has been published by various websites:

The binocular case clearly dates from after Normandy, because he was not yet a Staff Sergeant at the time.

This summer, his cousin Gary Grand contacted me and shared some of his family tree research with me.

Jack was dropped on D-Day right in the middle of Drop Zone C around Hiesville, France. It turns out that there was an anti-aircraft battery very close to their drop zone. The C-47s on either side of his plane were shot down, killing many of G Company’s paratroopers. The only reason Jack’s plane made it was that the pilot pulled off of the drop run to avoid the incoming fire. The pilot then did the unthinkable and reversed course and went on a second run in the opposite direction. This time the drop was made and Jack ended up in the middle of a cow pasture. He spent the first day just trying to reunite with his unit.

As stated in the previous post, Jack was not the jumpmaster on D-Day. This was Lt. Norman Barker, who was the Executive Officer of G Company.

The pilot’s name was Lt. Jesse Harrison, who later earned the Distinguished Flying Cross and would later meet Jack again.

Jack and Jesse ended up meeting again in a hospital in the UK. Jesse had been shot down over the drop zone in The Netherlands, but was able to save all on board and make his drop. He was badly burned and it was not expected that he would live. I have different stories of what happend to Jack. One version has him wounded, his hands so badly burned that he could not even load his rifle. He did not want to leave his unit, but he was ordered out. He ended up in the same ward as Jesse and helped nurse Jesse through the worst of his wounds. And it says he was sent back to his unit just prior to Bastogne. The other version is more prosaic: he was not wounded but had scabies, requiring him to be hospitalized during the Bastogne operation. Maybe one version doesn’t even exclude the other, but I haven’t been able to determine this for sure.

Jack was one of just 5 of the original members of G Company to finish the war. Gary says he believes the overall casualty rate was about 85% for G Company.

Reunited after the war

The Akron Beacon Journal of Sunday, February 24 1963 has Jack and some other members of his mortar squad attend the opening night of ‘The Longest Day‘ at the local Strand Theater. A picture has them posing with an 81mm mortar in the theater lobby. When interviewed, Urbank recalled “I dropped about 5 miles from the zone where I should have landed. When we had fought our way to the beach, I found it hard to believe there were so many ships in the world”. He also remembered the use of crickets and the ‘Flash’ and ‘Thunder’ challenge.

On June 7th, 1964 Jack appeared in the same newspaper on the occasion of the 20th anniversary commemorations of D-Day. Some interesting details gained from that interview are that their staging area was in Berkshire County, near Newmarket in England and he tells how they all got indian-style haircuts the night before June 5th because they were told they would be safer that way if they were wounded. Interestingly, Jack says that he was the jumpmaster. Other than that, the interview mostly matches the other sources. After landing, he says he couldn’t manage to reassemble his rifle because he forgot where he had put the trigger housing, but he did find it later.

Jesse and Jack reunited many years later after the war and the two visited each other several times before Jack passed in 2005. You can see several photos of this below:

I am glad for Gary and also Dan Coy (Jack’s son in law) sharing their information that would have been impossible to find otherwise. I tried looking up more information about Lt. Norman Barker, the other trooper mentioned as the jump master at D-Day, but no luck there.

Let me finish with a link to another article on the Trigger Time forum about the adventures of Lt. Jesse Harrison. His name is spelled differently, and the article mentions Urbank as the jump master, but it is a worthwhile article.
https://www.101airborneww2.com/troopcarrier3.html