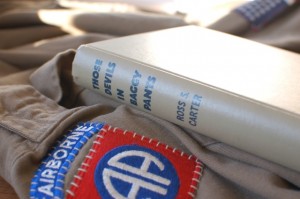 In this book we follow the 504th PIR of the 82nd Airborne from Spanish Morocco to the Ardennes. This parachute regiment participated in many of the combat jumps in WW2, and the author took part in all of them. He survived three years of almost continuous combat action, always at the spearhead of the allied advance. The origin of the nickname ‘Devils in Baggy Pants’ is explained on the cover sheet. It was found in the diary of a German officer who opposed the 504th on the Anzio beachhead. Most of this book is dedicated to Sicily and the Italian theatre (Salerno, Anzio), which is interesting because not so many good books have been written about this part of the war as Normandy, Holland or the Ardennes. While describing the horrible battles at Anzio and the Bulge, the author beautifully lets his characters – who were his actual buddies – develop throughout the book. For the reader this makes it more personal when these men eventually start getting killed, their luck running out. Ross Carter was luckier and lived to write this book shortly after the war, but soon died of cancer in 1947 at age 28. His brother Boyd published the book in 1951.