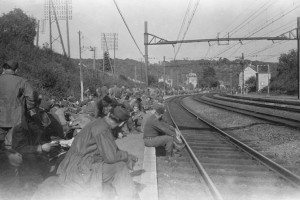 With his Rescued Film Project, the American photographer Levi Bettweiser recently got his hands on 31 undeveloped rolls of film with photos made by the same soldier during WW2. He developed them and we can now be the first people to ever see these photos after more than 70 years. No one has ever seen them before. Not even the photographer!

You can see them all on the web site of
The Rescued Film Project.