↓
Home→Movies→DVD The Last Days of Patton 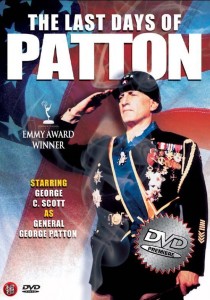 I got this dvd from eBay recently and I enjoyed it a lot. It’s an old TV movie from 1986 and quite unknown compared to the legendary Patton movie from 1970, although George C. Scott plays general Patton in both.

As the title suggests, this movie starts where the other one left off. General Patton got into an automobile accident in Germany, just the day before he was supposed to travel back home to the US. A good part of the movie is set at his sickbed in a hospital. He was paralized from the neck down. His wife comes over from the US and spends the last days at his side. We see flashbacks about his early life. I found it all very moving and a great complement to the first movie.

Especially interesting is the repeated reference to Patton’s conviction that the US should have taken on the Soviets right there and then, when they had the army there. He predicted that within five years, the US would be at war with Russia, but that it would be another kind of war. But the army was largely disbanded in 1945, leaving behind the Army of Occupation. Patton was the last four-star general to leave Europe, and in a way he never left.

Read more interesting facts about this movie on IMDB.