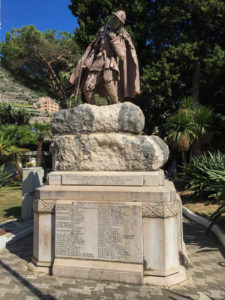 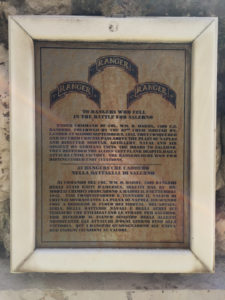 When on vacation at the Amalfi coast and Salerno-Napels region this summer, I visited some interesting WWII sites that I would like to share with you. I’m starting with the smallest one first: a monument to the contribution of the US Rangers during operation Avalanche – better known as the Salerno landings, executed on 9 September 1943 as part of the Allied invasion of Italy. The Italians withdrew from the war the day before the invasion, but the Allies landed in an area defended by German troops.

Things went South quickly that day when the 5th Army landed on a very broad 35-mile front, with the attacking Corps spread far apart and with a terrain highly favorable to the defender. A Ranger force under Colonel William O. Darby consisting of three US Ranger battalions and two British Commando units was tasked with holding the mountain passes leading to Naples, but no plan existed for linking the Ranger force up with X Corps’ follow-up units. Finally, although tactical surprise was unlikely, Clark ordered no naval preparatory bombardment take place, despite experience in the Pacific Theatre demonstrating it was absolutely necessary. The Rangers landed at Maiori and the Italian WWII monument on the seaside boulevard bears a plaque to their memory. Other than that, there’s nothing left to remind us of the presence of Americans in WWII.